Time for my latest prediction of the election result – and it’s almost a dead heat:

Here’s how that breaks down by party: 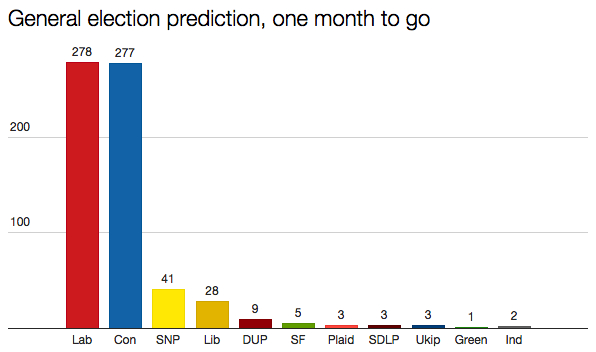 As usual I’ve calculated the prediction by assessing what I think will happen in individual seats, not by extrapolating anything from opinion polls, swings or trends.

Labour’s total of 278 is up 20 on its result in 2010. It includes Corby, which the party won in a by-election in 2012, and Bradford West, which I now think the party will take back from George Galloway.

The Conservatives’ total of 277 is down 29 on what they got in 2010, and doesn’t include the seat of the Speaker John Bercow. The Lib Dems are also down 29. Plaid’s total of three includes one loss to Labour (Arfon) but one gain from the Lib Dems (Ceredigion). Caroline Lucas will hold her seat for the Greens in Brighton Pavilion. In Northern Ireland the DUP will gain Belfast East from the Alliance but otherwise there will be no change.

Yet again I’ve increased my prediction for the SNP. This month I’ve put them on a total of 41 seats, which represents an increase of 35 on 2010. I’ve handed them nine gains from the Liberal Democrats, one from the Tories and 25 from Labour.

Based on these figures, a Tory-Lib Dem coalition would total only 305: 21 short of the theoretical number needed for an absolute majority in the House of Commons. Add in the DUP and you’d have 314. Labour plus SNP would come to 319; add the SDLP, Plaid and the Greens and you’d get exactly 326.

The only combination with a comfortable majority would be some kind of deal between Labour, the Lib Dems and the SNP, who between them would have 347.

I’ll do another prediction with two weeks to go, and a final forecast on 7 May itself. In the meantime, here’s how I calculated the current totals, which are compared with the 2010 general election result.

From the Conservatives: Dumfriesshire, Clydesdale & Tweeddale.

From the Conservatives: Clacton, Rochester & Strood and Thurrock.

From the Lib Dems: Ceredigion.

5 responses to ‘One month to go’