Only one seat was up for grabs in this week’s local by-elections. It was on Harlow council, and it was won by Labour from Ukip: 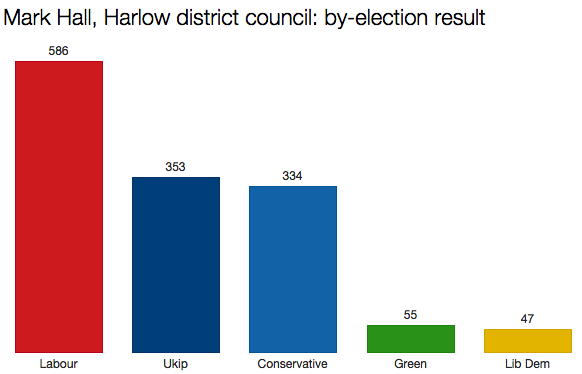 The result represents a 10% swing from Ukip to Labour.

It’s an intriguing outcome for a number of reasons. Harlow council is run by Labour, but before this by-election the party had a majority of only only one seat. That’s now gone up to a slightly more manageable three. Ukip won five seats on Harlow council in 2014’s local elections: three from Labour, one from the Tories and one from the Harlow Independent Party. One of those gains from Labour was in the ward of Mark Hall: the same ward that Labour retook on Thursday.

The by-election result was also disappointing for the Tories, as it showed a net switch of more than 6% from them to Labour since the 2010 local elections in Harlow, which were fought on the same day as the 2010 general election. If this sort of movement was repeated throughout the constituency, Labour would win here on 7 May. And Harlow has voted for the winning party in every general election since 1983.

Harlow isn’t on my list of likely Labour gains, however. Since winning the seat in 2010, Tory MP Robert Halfon has built up a strong following and a big public profile (BBC2’s current documentary series Inside the Commons is proof of that). Labour would need a swing of 5.6% to retake the seat. I think it’s probably beyond them, at least in this general election. But it could be a close contest, especially if Ukip manages to take more votes from the Conservatives than Labour.