Academics from the British Election Study yesterday published what they called a “nowcast” (as opposed to a forecast) of the general election result. It caused quite a stir on social media, mainly because it suggested the Liberal Democrats were set to win just one seat. That’s right: one seat.

Jon Mellon from the BES offered a number of reasons for this startling assessment, including the way the study group calculates swing and the fact it uses polls based on standard voting intention rather than the “thinking of your own constituency” method preferred by people like Lord Ashcroft.

Mellon also conceded that voters “may focus more on [their] own MP closer to the election, but that’s not reflected in current data.”

A Liberal Democrat party reduced to just one MP sounds utterly absurd, though nothing is impossible when it comes to elections. In my most recent prediction I suggested the Lib Dems would hold 28 seats in the next parliament: down almost half on the number they won in 2010, but still above what many others have been forecasting.

To get a clearer idea of the challenge the Lib Dems are facing, as well as the likelihood of them losing even more than half their MPs, I’ve grouped their seats according to which party is posing the main threat.

There are really only 12 seats that Labour can hope to gain from the Lib Dems, and that includes the unlikely scenario of defeating Nick Clegg in Sheffield Hallam. A total of 12 is not many, and it’s worth remembering this. Losing seats to Labour is not as arithmetically decisive for the Lib Dems as losing seats to the Conservatives. Here’s why:

One of the most crucial factors that shapes the outcome of the election will be just how far down this list of 31 seats the Tories can go. At the moment I think they will only gain around a third of them. But you can see that a lot more could change hands on only moderately-sized swings. We know Labour will take pretty much all of its Lib Dem targets. How many will the Tories manage to grab?

As if that wasn’t enough of a headache for Nick Clegg, his party now faces a third threat in the shape of the SNP: 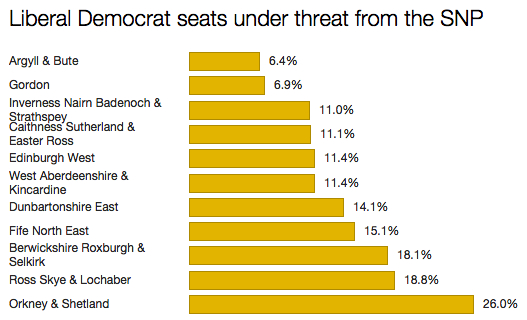 I handed eight of these seats to the SNP in my latest prediction. But as with Labour, there’s a relatively modest limit to the number of seats the Lib Dems could lose in Scotland. And I don’t think even the SNP can manage to take Orkney & Shetland, the Lib Dems’ safest seat in the entire United Kingdom.

Elsewhere the Lib Dems are facing a fourth threat. The Greens are making a strong challenge for Bristol West, where they need a 22.1% swing to take the seat. That would be an enormous feat, but it’s one the Greens believe they can do and one that is giving the Lib Dems real concern.

That just leaves two other seats. Plaid Cymru is the main challenger in Ceredigion, and needs a 10.9% swing to win. At present, I think this is unlikely. Then there is Portsmouth South, which Mike Hancock won for the Lib Dems in 2010. Hancock now sits as an independent and is not seeking reelection this year. The Tories need a 6.3% swing to win.

Forces are advancing on the Lib Dems from a number of fronts. What the party will try and do, indeed the only thing it can do, is to treat the general elections as 57 by-elections. How many they will win is, for the moment, a matter of conjecture. But I’m pretty sure it will be more than one.

3 responses to ‘Parties are advancing on the Lib Dems from four fronts: how many MPs will survive?’