Halfway through February, the opinion polls are still clinging stubbornly to the trend of the past few months:

Ukip is on 14.6%: 0.5 points lower than January. The Liberal Democrats are on 7.2%: yet another record low for this parliament. At this rate the party will be below 7% by April.

If the trends look fairly flat for the past six months, here’s the story of the last 12 months: 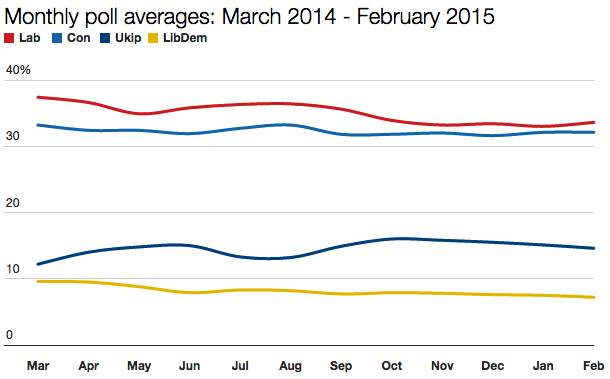 After a period of movement for both Labour and Ukip in the middle of 2014, both parties have somewhat settled down of late. Since October, Ukip’s average has been in a gentle decline, while Labour has been bumping around between 33 and 34%. The Tories have remained stuck below 33% save for August, when they hit the dizzying height of 33.2%. The Lib Dems just keep on sinking.

As ever, I’d caution against extrapolating anything precise about the election result from these figures. The polls tell their own story, and it’s always an interesting one, but it’s not one that foretells what will happen on 7 May.

One response to “Poll update: no surges, no slumps”