1. If Farage was out to disrupt the two-party system and play the “devil on both your houses” card to its full effect, he should have picked a Tory marginal or a Labour target. Instead he’s gone for a safe Tory seat which Labour has very little chance of retaking (despite having held it as recently as 2010).

As such he’s fashioned himself a contest where the potential to not merely lose but lose badly is all the greater. For anti-Ukip voters, there is only one candidate to choose to see off Farage. I envisage some tactical voting along the lines of that seen in the Newark by-election, with Labour and Lib Dem supporters “lending” their cross to the Tories to ensure Ukip’s defeat.

2. The way in which the news of Farage’s decision became public hasn’t done him any favours. I’d have thought he would have wanted to make a big splash and milk the occasion for all its media potential. That’s how Ukip usually prefers to operate, and to be fair to the party it usually works very well.

Instead the world learned of Farage’s intentions on a wet Friday afternoon by accident rather than design, and at the end of a week stuffed with big news stories. Maybe Farage will try for another splash when he gets formally chosen as the candidate. But the impact will be less as the opportunity for a shock, sudden announcement has passed.

3. Farage will be up against one of his own – or rather, someone who used to be one of his own. The Tory candidate is Craig Mackinlay, former deputy leader of Ukip. Mackinlay switched to the Tories in 2005, since when he’s served on Medway council and Kent Police Authority. He was the Conservative candidate for Kent in the police and crime commissioner elections in 2012, but lost to Ann Barnes, an independent.

We now have the prospect of two Eurosceptic figureheads going head-to-head to win a seat currently represented by a pro-European (Tory MP Laura Sandys).

4. Just how many Eurosceptic votes are there to be won in Thanet South? The local council is currently in no overall control, with 26 Labour members, 23 Tories, five independents and just two Ukip. Admittedly the last full set of local elections were held in 2011, when Ukip stood in only four wards. The 2013 Kent county council elections left Ukip with 17 out of 84 seats, some way behind the Tories’ total of 44, but large enough to form the official opposition. Ian Warren has done a superb breakdown of South Thanet’s demographics for The Spectator.

The seat has definitely become more of a Tory-Ukip battleground of late, but this harks back to my first point above: Farage has contrived a contest where he faces one very potent challenger, rather than two or more opponents who could have been more likely to split the anti-Ukip vote.

5. I’ve said a few times on this blog that I don’t expect Ukip to win any seats at the election, so you won’t be surprised to read that I think Mackinlay will hold Thanet South for the Conservatives. It’ll be a fascinating if grisly contest, however, and residents should steel themselves for an almighty dose of hysteria and hullabaloo.

I suspect both Ukip and the Tories are rather looking forward to it all – while Labour will be merely by thankful Farage has not pitched camp in one of its targets. 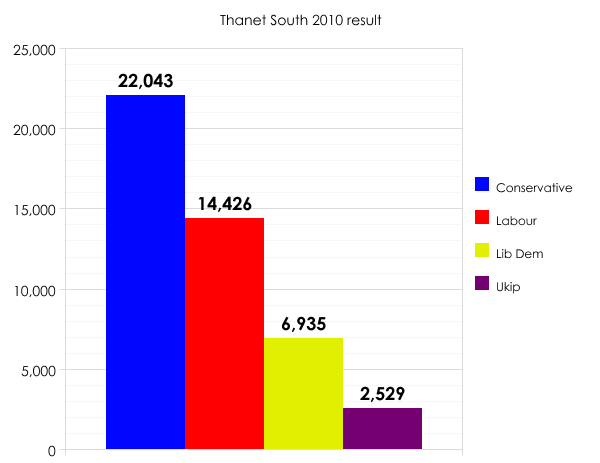