From a region where the Tories are rampant to one where they are almost extinct.

Scotland currently has just one Conservative MP, and even he might be gone come next year. As with East Anglia, there is only really one party likely to make gains here at the general election – and in both cases it is Labour.

This is how things currently stand:

The one independent MP is Falkirk‘s Eric Joyce, who resigned from the Labour party in 2012. Labour will be almost certainly “retake” this seat in 2015, and the party will be hoping for at least four more gains.

Labour’s current tally of 40 seats will go up in 2015 – of that I have no doubt. By how many depends on how well a defence is mounted by the Liberal Democrats and the SNP. If both are in retreat, Labour could feasibly bump up their total to at least 45 (counting Falkirk), if not higher.

Three of Labour’s Scottish targets are Lib Dem seats: Jo Swinson in East Dunbartonshire, Mike Crockart in Edinburgh West, and John Thurso in Caithness, Sutherland & Easter Ross. I think Swinson and Crockart are most at risk – Swinson in particular, if, as rumoured, she gets promoted to Scottish secretary in the autumn. 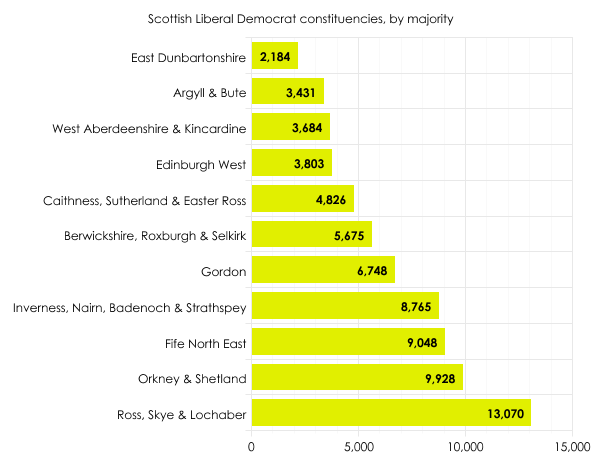 The Lib Dems are also notionally vulnerable to the Tories in Argyll & Bute and West Aberdeenshire & Kincardine, though both would require swings of over 3% for the seats to change hands. I suspect this will be beyond the Conservatives, whose main concern in Scotland will be simply to hang on to the one seat they’ve already got.

David Mundell in Dumfries, Clydesdale & Tweeddale is sitting on a majority of 4,194. His seat would fall to Labour on a swing of 4.6%. Labour would dearly love to be able to boast of having banished the Tories from Scotland, as per 1997. The seat sprawls across some diverse demographics, however, with the Dumfriesshire chunk being very safe Tory territory. This will be a tough battle for Labour to win.

In my list of statistics above I give the Tories’ five targets in Scotland. In addition to those two Lib Dems seats of Argyll & Bute and West Aberdeenshire & Kincardine, they are second place behind the SNP in the marginal seats of Angus, Banff & Buchan and Perth & North Perthshire. But as with the Lib Dems and their targets, I can’t see the Tories making any gains in Scotland, and for the same reason.

On paper the SNP have no targets in Scotland whatsoever. In theory they would like to vacuum up at least a dozen more constituencies, but the party is not the challenger in any of the region’s 15 marginals. Their sole hope is maybe unseating Labour’s Gordon Banks in Ochil & South Perthshire (majority 5,187) or Iain McKenzie in Inverclyde (5,838).

I expect the party will prioritise a defence of its existing six seats, five of which are technically marginals:

I’ve previously said that none of these will change hands, and I’m sticking with that prediction (for now). Even though Labour is the challenger in Dundee East and Na h-Eileanan an Iar, these battlegrounds have a very different dynamic to those in Lib Dem-Labour seats. The outcome of the referendum may have some bearing here.

Labour ought to hold on to each and every one of its Scottish seats in 2015, besides “retaking” Falkirk. It’ll be interesting to see if the party’s safest constituency in the region, Kirkcaldy & Cowdenbeath, is once again contested by former prime minister Gordon Brown.

Here’s the full roll-call. I’ve included the Falkirk result from 2010. 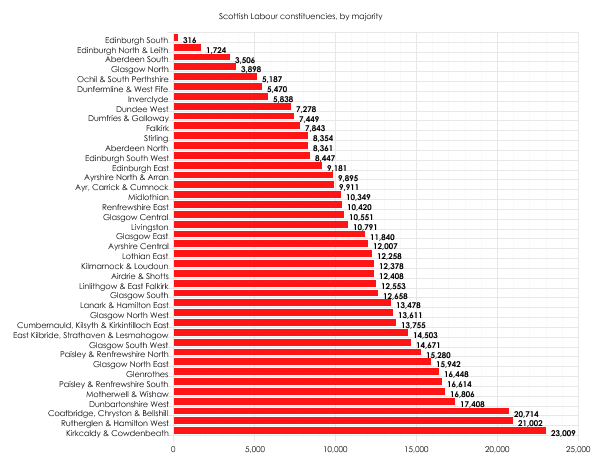 If nothing else, this wedge of red is a reminder of how desperate the party is to avoid Scotland voting Yes in the independence referendum. And if the UK should stay together, I suspect the wedge will only increase in size on polling day.