Here’s where the next election will be won and lost. The newly-elected MPs in each of these seats might want to start thinking now about how they are going to win in 2020. The other parties ought not to wait too long to get their candidates in place. 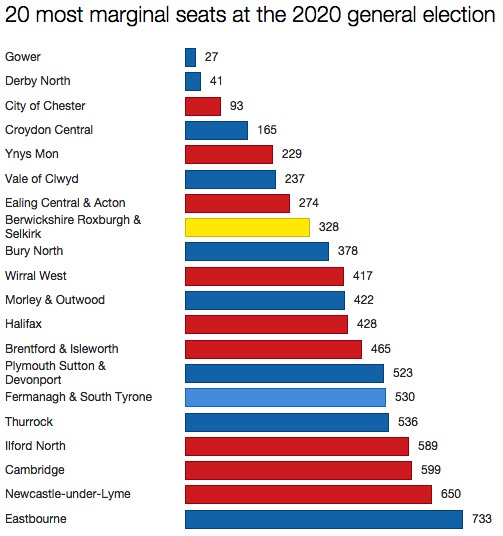 Note that over half of these seats – Derby North, City of Chester, Ealing Central & Acton, Bury North, Wirral West, Brentford & Isleworth, Plymouth Sutton & Devonport, Fermanagh & South Tyrone, Thurrock, Ilford North and Cambridge – were key seats in this year’s election. The voters of these constituencies are going to get little rest from campaigning over the next five years.

Some of the seats in the following list will also be rather familiar:

Croydon Central, Bury North, Thurrock, Plymouth Sutton & Devonport, Brighton Kemptown… off we go again. But one of the many ways this year’s election has changed the battleground is to remove the presence of a third party. In 2020 Labour will have only one target seat that does not currently belong to the Tories. It will make that election, at least in England and Wales, a lot more of a binary contest.

For the Tories, the destruction of the Liberal Democrats is even now not yet complete. They will already be eyeing Southport, where a swing of 1.5% will be enough for the seat to change hands, and also Carshalton & Wallington (1.6%). A swing in Labour-held seats of 2.5% would also give the Tories around 15 more seats.

There will be almost no battleground seats in Scotland in 2020. Only Berwickshire Roxburgh & Selkirk, Dumfriesshire Clydesdale & Tweeddale and Dunbartonshire East are likely to be in play. The first would be won by the Tories on a swing of just 0.3%. The second would fall to the SNP on a swing of 0.8%. The third would need a swing of 2% to go back to the Lib Dems.

The size of the swing to the SNP this year was so enormous that there are likely to be just as many battleground seats in Northern Ireland as Scotland in 2020. Sinn Fein would need a swing of 0.6% to regain Fermanagh & South Tyrone from the Ulster Unionists. The DUP could take Belfast South from the SDLP on a swing of 1.2%. Finally, Upper Bann would fall to the Ulster Unionists on a swing of 2.4% from the DUP – something that even now seems rather unlikely.

I’m going to do a separate post looking at the chances for Ukip and the Greens.

18 responses to ‘The new election battleground’