I’ve long argued that Nigel Farage will struggle to win the seat of Thanet South. I said as much the moment he announced his intention to stand for Ukip in the Kent constituency. I’ve never included a win for Farage in my monthly predictions of the general election result. And I remain baffled as to why he chose to fight this seat, a safe Tory constituency, when he could have commanded far more attention had he picked a Tory marginal, especially one that was also a top Labour target.

It’s true that Murray’s comic creation will place Farage in the kind of tricky situation he was never likely to experience at the hands of his Tory or Labour opponents. The Pub Landlord is a means of attacking Farage from even more of an anti-establishment position than the one Farage has fashioned for himself.

But the Ukip leader’s dilemma is unchanged. He is contesting a seat that is not rated as one of Ukip’s best prospects for victory; the current Tory MP Laura Sandys has a majority of 7,617 (though admittedly she’s not standing this time); Farage needs an enormous swing of 21.3% to take the seat; he doesn’t seem to have spent an awful lot of time in the constituency to date; the latest poll to be conducted in the seat put the Tories five points ahead of Ukip; and Farage’s role as Ukip leader will require him to spend much of the campaign travelling the country rather than cultivating support in his own battleground.

Ukip’s best chance of winning a seat at the general election (as opposed to holding a seat it won in a by-election prompted by a Tory defection) looks to be Boston & Skegness. I’m not entirely convinced the party will succeed, but it’s certainly more of a seat to watch than Thanet South. It was also the seat where the party did best in 2010, if you discount Buckingham, which was a special case*: 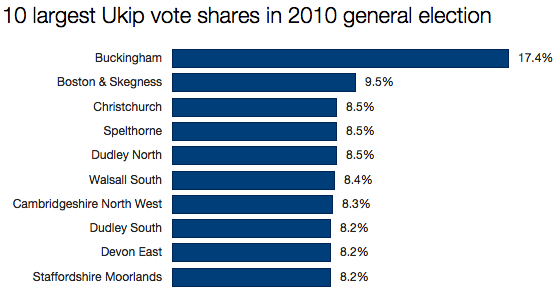 Boston & Skegness aside, the only other seats on that list which I believe Ukip is targeting heavily in 2015 are the two Dudley constituencies. Thanet South is nowhere to be seen on that list – nor any seats in the south-east, for that matter.

It strikes me that Nigel Farage could have fashioned a much easier contest for himself had he tried for Boston & Skegness or even somewhere in the West Midlands. But he’s plumped for Kent, from where he will address the nation on the night of 7 May – conveniently placed for a quick getaway back to Brussels the following morning.

*Buckingham is the seat of speaker John Bercow, and as such – by tradition – the Tories, Labour and the Liberal Democrats did not field any candidates here in 2010.