Labour’s lead over the Conservatives has narrowed slowly but persistently over the past few months. November saw this trend continue. The gap between the two parties’ average poll scores shrank to 1.2 percentage points, with Labour averaging 33.2% and the Tories 32%: 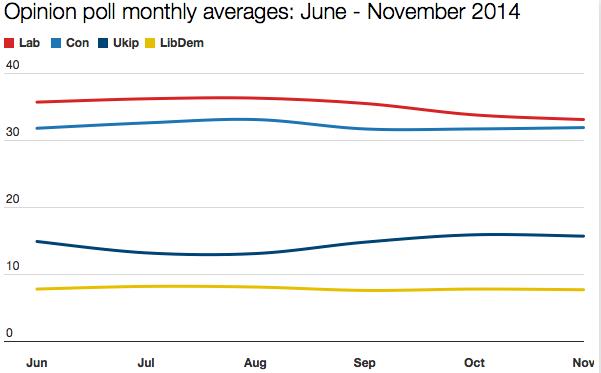 Ukip slipped very slightly from its October peak of 16% down to 15.8%. The Liberal Democrats remained stuck below 8% for the third month in a row, averaging just 7.8%.

I wrote of last month’s averages that the picture suggested by nationwide polls feels increasingly at odds with how things stand a regional and local level. This has not changed. November’s averages mask huge variations in Labour’s support across the UK, and do not reflect how poorly the party is faring currently against the SNP in Scotland. Neither do the averages make allowances for Ukip’s success in winning the Rochester & Strood by-election, which saw its total number of MPs rise to two.

Type November’s figures into an online swingometer and you’ll get a prediction where Ukip wins no seats and the SNP makes no gains. Neither of these seem plausible outcomes. What you will get is a hung parliament, albeit one with Labour comfortably ahead of the Conservatives and well above 300 MPs. I’m not sure either will come to pass, though my instinct is that Labour will still end up with the biggest number of seats. More of this on 7 December when I make my next monthly prediction of the election result.

Meanwhile here is how the polling averages have changed this year: 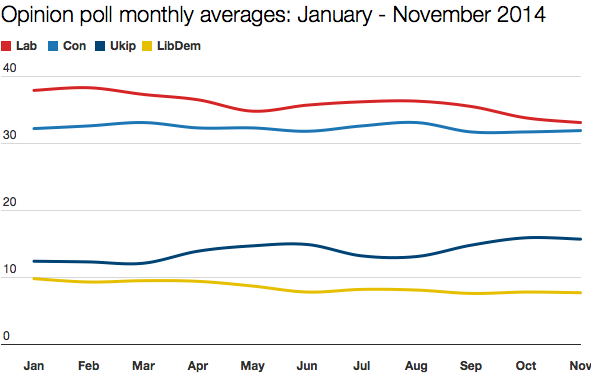