I made the point a few days ago that, for all the attention being rightly focused on Ukip, the Greens and the SNP, it’s nonetheless still the case that the Labour-Conservative battleground will determine the outcome of the election.

I thought I’d follow this up with an illustration of the size of the task facing Labour to – at the very least – become the largest party in the next parliament.

Now let’s decide on a figure for the total number of seats that would mean Labour is the largest party in the next parliament. As a bare minimum, I’m going to suggest 300. That’s six fewer seats than the Tories managed in 2010, but 300 feels like a useful and symbolic target.

To get to 300, Labour needs to win an additional 42 seats. Where might these come from?

Below I’ve listed around 50 of the most marginal seats where Labour came second in 2010.

I’ve divided them according to the size of the swing Labour would need to take the seats.

First, here are all the constituencies with a majority small enough to change hands on a swing of under 1%. There are 13 in total: 11 Conservative seats and two held by the Liberal Democrats.

If Labour fails to win these kinds of seats, it will be heading for a dreadful election. Let’s give the party the benefit of the doubt and say these will be easy gains. Labour’s total would now be up to 271: 29 short of 300.

Next, here are all the constituencies with majorities small enough to change hands on a swing between 1 and 2%. There are 16 in all, enough to bump Labour’s total up to 287. 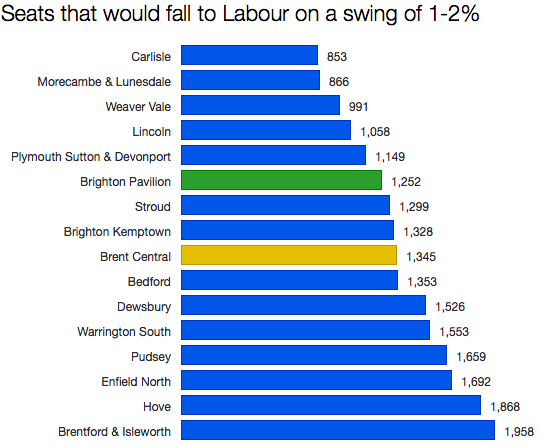 We’re still not up to 300, however, so we need to go further. Here are the seats needing swings of between 2 and 3% to change hands. There are 17 in all. Add these to the seats mentioned so far, and Labour would be past the 300 threshold and up to 304.

Except of course it’s not going to be this simple. Not at all.

Second, Caroline Lucas will almost certainly hold on for the Greens in Brighton Pavilion.

Third, despite their relatively small majorities, some of these Tory seats may well stay Tory. In a set of polls published by Lord Ashcroft earlier this month, the parties were tied in Pudsey and the Conservatives were actually ahead of Labour in Gloucester.

Fourth, Plaid Cymru will throw all it can at keeping Arfon and a Labour gain cannot be taken for granted.

All of this means Labour will have to push further down its target list to even have a hope of hitting 300 seats. And that means trying to win seats on an even bigger swing. Seats like these:

Birmingham Yardley feels like a safe bet for a Labour gain, but the others? The London seats of Harrow East and Ealing Central & Acton may well change hands, but I sense it’s going to be a struggle for Labour to unseat people like education secretary Nicky Morgan in Loughborough.

Labour really needs to be aiming for a swing of above 4% to be absolutely sure of ending up the largest party in parliament. If the SNP help themselves to half a dozen or so seats in Scotland, and if Ukip even manages to take one or two from Labour elsewhere in the UK, then the task becomes harder still.

And yet the current opinion poll trends suggest that, were the election to take place tomorrow, this is exactly what Labour would achieve.

It’s also what I feel is currently the most likely outcome, with Labour ultimately profiting from swings in Lib Dem seats that are much higher than those elsewhere.

But it will be close – very close indeed. Labour may even slip below 300 seats and still end up in power, thanks to our first-past-the-post system for electing MPs, a lopsided distribution of votes, and a coalition with one or more other parties.

Whatever precisely comes to pass, it will Labour’s success (or otherwise) in all those blue seats listed above that will hand the party ultimately a tiny victory or a narrow defeat.