This month’s Liberal Democrat conference unspooled to an accompaniment of undisguised coalition bartering. Senior party members from Nick Clegg downwards were only too happy to advertise their readiness for a re-run of power-sharing post-2015, and arguably with the Tories rather than Labour.

But all this talk presupposes that the Lib Dems will win enough MPs at the election to actually make the party indispensable in the formation of government. They could be so reduced in size as to render themselves arithmetically irrelevant. Maybe the Tories or Labour will only just fall short of winning a majority and decide to run a minority administration. Perhaps the Lib Dems could even end up one of a number of groups in a coalition.

With each seat lost, so the party’s significance is diluted. But just how thin might the Liberal Democrats’ ranks be after polling day – and would it be Labour or the Conservatives who would benefit the most?

Of the Lib Dems’ current total of 57 seats, Labour is in second place in just 18. As such there’s a limit as to how much damage Clegg and co will suffer at the hands of Miliband’s party. Even if the swing from Lib Dem to Labour is a hefty one (which opinion polls suggest it might be), when viewed as a proportion of the party’s overall tally of seats, these losses are not of themselves catastrophic.

Here’s the list, ranked according to majority from smallest to largest. I reckon Labour will make it down at least as far as Redcar, and possibly all the way to Hornsey & Wood Green: 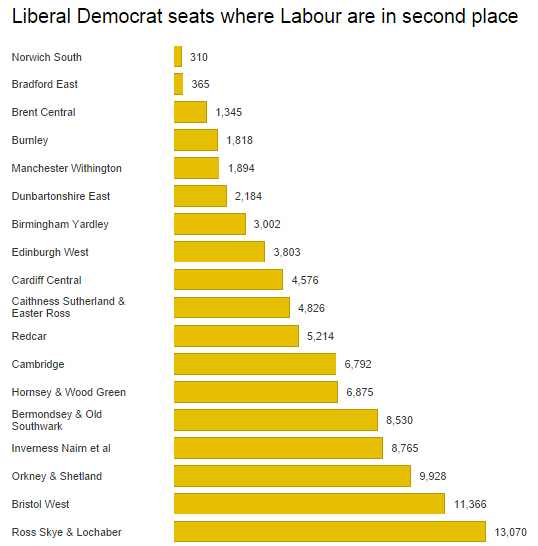 Labour may pick off 13 of the 18 seats in which they are in second place. There’d almost be no Lib Dem-Labour marginals left – though we’d get a fresh batch of Labour-Lib Dem marginals in return.

Such a change would drive the Lib Dems out of many urban constituencies, as they already have been at a local government level. For Labour, this kind of haul would be vital in the task of ending up the largest party in parliament. I just don’t see how Ed Miliband can finish in first place without a sizeable portion of Lib Dem gains. The results of these contests matter far more to him than to Nick Clegg.

Of much greater importance to the Lib Dems are the seats where the Tories are challenging. Here, the list is much longer. There are Conservatives in second place in a total of 36 seats. And it is this fact that may reassure some in the Lib Dems that the scale of their losses at the election can be contained. If the swing from Lib Dem to Conservative is smaller than that from Lib Dem to Labour, the damage may be minimal. If it were of the same size, a great many Liberal Democrats would lose their seats.

At the moment, I can’t see the Tories making their way as far down this list as Labour will on theirs. And I certainly don’t think they will pick off every MP as they go:

Tactically, there’s a case to be made for the Lib Dems focusing far more resources on holding these kinds of seats than those on the Labour list. The contests with the Tories could well prove to be closer, if more bruising. Labour voters in these seats who don’t like the Tories ought to be easier to woo than Tory voters in Labour seats.

The size of this list also serves as a reminder of how the Liberal Democrats remain first and foremost an alternative to the Conservatives – which, given both parties have been in a coalition for the past five years, renders these seats rich with potential for unpredictable outcomes.

Altogether I think we’ll see at the very least the Lib Dems losing a third of their seats (19 of 57). Most will go to Labour, which will be doubly problematic for the Tories as they also need Lib Dem gains to offset their own losses to Labour (and, who knows, to Ukip).

If there is another coalition, however, any agreement with the Liberal Democrats would surely see their portfolio of Cabinet positions scaled back to match their reduced number of MPs. And it’ll be hard for the party to claim they are making their voices heard in government when that happens.

2 responses to ‘The Lib Dem seats in full: how far down the list will the Tories and Labour go?’