Last week I wondered why there had been no polls conducted in Heywood & Middleton ahead of the by-election on 9 October. Well, now one has been carried out by Survation – and as expected it suggests Labour will hold the seat: 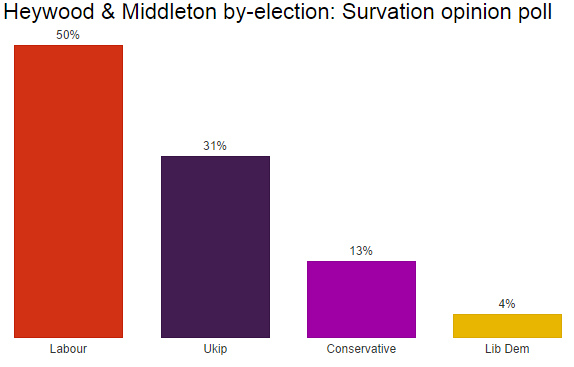 I also posed two questions last week: might Ukip jump from fifth to second, and will the Liberal Democrats lose their deposit? This poll implies both are likely to happen. Here’s the change in the share of the vote compared with the 2010 general election result:

Both Labour and Ukip seem to be profiting from a fall in support for the Tories and Lib Dems. The latter in particular look to be heading for yet another wretched by-election performance.

I don’t think the outcome of this contest was ever really in doubt, though Ukip has done its best to scare its rivals into thinking it might win – and they have responded in kind, Labour especially.

The margin of Labour’s victory suggested by Survation’s poll is in line with how the party has fared against Ukip in recent by-elections. If anything a 19-point gap is on the low side. In the Wythenshawe & Sale East by-election in February 2014, Labour won with a 37.4-point lead over Ukip; in South Shields in May 2013 it was 26.3; in Rotherham in November 2012 it was 24.8.

It’s the percentages that will be the most interesting thing to watch for next Thursday. The winner, both here and in Clacton, is a foregone conclusion.

3 responses to ‘In Clacton and Heywood & Middleton, second place will matter more than first when the results are read out’