The East Midlands is going to play a key role in the outcome of the election.

Over a third of its constituencies are marginals, of which almost half have majorities under 1,000. It is a region rich with battleground seats, a number of which could well change hands on polling day.

But only two parties are in contention here. The East Midlands is a region dominated solely by Conservatives and Labour. Other areas of the country share this distinction, but few of them have quite so many marginal seats within their borders – hence the importance of the East Midlands in helping shape the future of our next parliament.

The Tories are defending seven marginals here, and every single one is a Labour target. 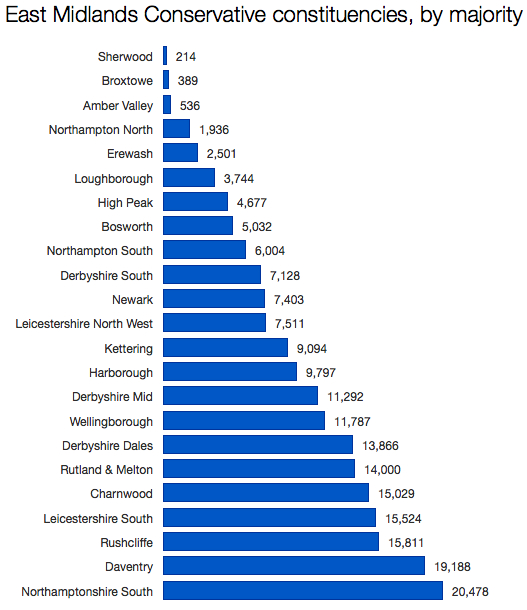 At least three ought to change hands: Sherwood, Broxtowe and Amber Valley. Labour will be itching to pick up more, however, especially the prize scalp of education secretary Nicky Morgan in Loughborough. A swing of 3.5% would see her lose her seat.

As you’d expect, the Tories’ five targets are all Labour seats. They would need a 0.7% swing to unseat Chris Williamson in Derby North, whose majority is just 613. I have to say this feels very unlikely, and I’m not persuaded – as yet – that the Tories will make any gains in this region. The polls seem to bear this out, though if they start to narrow a few Labour MPs might begin to feel uneasy. 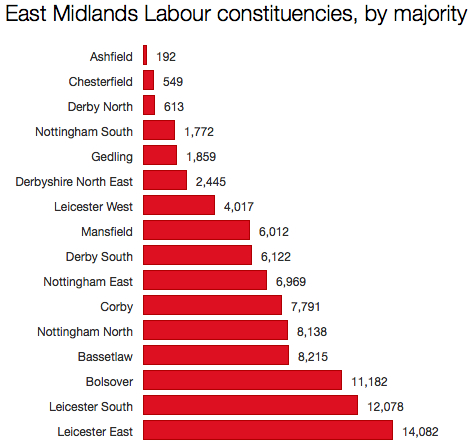 Almost half of their seats in the region are marginals, three of them with majorities below 1,000. Gloria de Piero has a majority of just 192 in Ashfield, but her challengers are not the Tories but the Liberal Democrats, so despite Ukip reportedly eyeing the seat she should be perfectly fine.

The same goes for Toby Perkins in Chesterfield, the Lib Dems’ other notional target.

It is the seats of Derby North, Nottingham South and Gedling that the Tories will be targeting seriously and where Labour will need to fight hard. As I say above, as things currently stand I don’t expect Labour to lose any of them. Derby North was actually a three-way marginal in 2010, with the Lib Dems ending up in third place on 28% of the vote compared with Labour’s 33%. But this might work in Chris Williamson’s favour in 2015, especially if the Lib Dem vote collapses in his direction.

It will be a good night for Labour if they hold all their seats in the East Midlands and pick off at least five more from the Tories. That’s the number they need to gain to stand any chance of forming a majority government. They’d need four to take their tally to 20 and become the largest party in the region.

A final note: the East Midlands boasts a bumper assortment of veterans and big beasts, all of whom are in safe seats and all of whom I hope will be standing again. The House of Commons would be a poorer place without the likes of Ken Clarke (Rushcliffe), Dennis Skinner (Bolsover), Margaret Beckett (Derby South), Stephen Dorrell (Charnwood), Alan Duncan (Rutland & Melton) and Keith Vaz (Leicester East).