The significance of Thursday’s referendum has prompted speculation we’re set for an enormous turnout.  The extension of the franchise to 16 and 17-year-olds, plus talk of a “once in a generation” opportunity for change, has raised expectations to dizzy heights. Alex Salmond has done nothing to dampen this, saying in August: “I think the best bet of this referendum is a bet on an 80% poll. If you can get odds on an 80% poll, you bet it.”

That certainly would be a remarkably high figure – but it wouldn’t be a record breaker. The total to beat in a UK referendum is 81.1%. That was the turnout in the referendum held in Northern Ireland in 1998 over whether to approve the Good Friday Agreement.

There have been 13 national or regional-based referendums in the modern political history of the UK. I’ve ranked them in order of turnout, starting with the biggest: 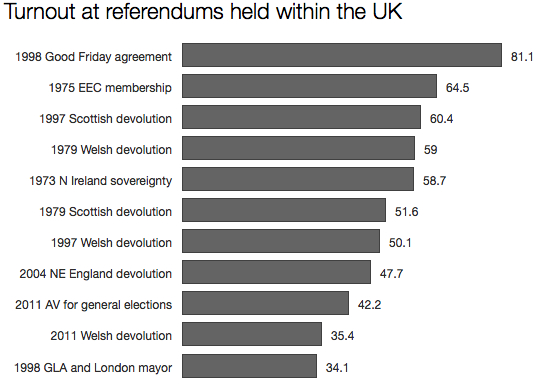 It’s telling that the UK’s four most recent referendums have also been the four with the lowest turnouts of all. It’s particularly pathetic that little over a third of Londoners bothered to vote in the referendum granting them their own mayor and assembly.

Referendums in Scotland have a track record of attracting a more respectable turnout, with 51.6% taking part in the devolution vote in 1979 and 60.4% 18 years later.

Infamously the 1979 vote, despite being in favour of devolution, did not result in a Scottish parliament. Rather it led to the fall of the sitting Labour government on a vote of confidence.

This was thanks to a clause in the associate legislation specifying that a Yes vote would only be valid if it were supported by at least 40% of the entire electorate.

Instead only 32.9% of the electoral roll voted Yes. As such devolution did not go ahead, prompting the SNP to withdraw its support of Jim Callaghan’s minority Labour government, leading to the vote of confidence, a general election and – as Labour never ceased to remind its SNP rivals – 18 years of Tory government.

There is no such stipulation in Thursday’s referendum. A simple majority of one vote will be enough for Scotland to win independence or remain within the UK.