The slight swing back towards the two mainstream parties I noticed at the start of August is persisting.

The trends suggest both Labour and the Tories are currently getting a gentle boost at the expense of their smaller rivals. Labour’s mid-month average is 36.5%, up 0.3 points on July, while the Tories are on 33.5%, up 0.8: 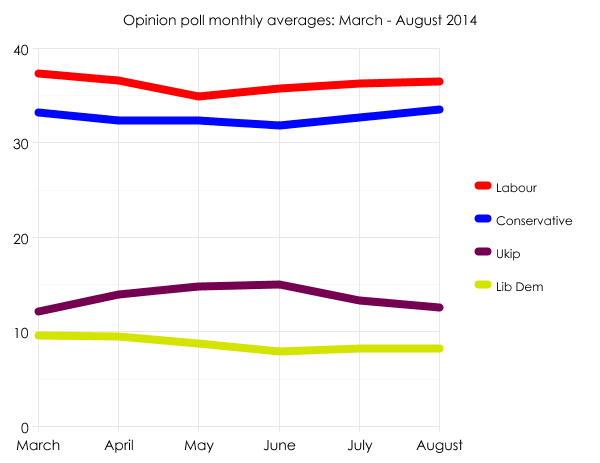 You can see that both have been moving in the same direction in the polls for the past few months, with roughly the same size gap between them. Ukip, however, seems to be on a downward trend, currently tracking at 12.6%. The lowest the party has scored this calendar year was in March (12.2%); the lowest in the past 12 months was December 2013 (11.1%). Ukip’s average hasn’t been in single figures since February 2013 (9.7%).

The Lib Dems are currently averaging 8.3%, up from July’s all-time low for this parliament of 7.9%.

For a slightly longer-term perspective, here’s how the trends have fluctuated over the past 12 months: 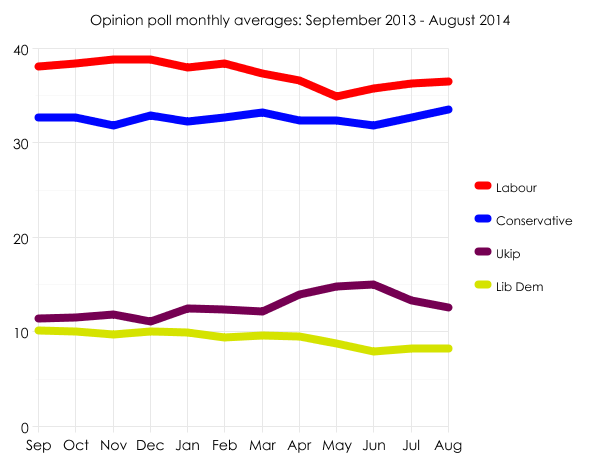 If you were to divide the life of this parliament into chapters based on opinion polls, chapter one would be from May 2010 to December 2010, up to when Labour overtook the Tories for the first time. Chapter two would run from January 2011 to February 2014, throughout which Labour remained comfortably ahead (bar a brief blip at the end of 2011 following David Cameron’s EU veto). Chapter three began in March 2014 when Labour started its decline, from which it has yet to fully recover, though it continues to remain ahead of the Tories.

As for chapter four, that would begin if and when the Tories overtake Labour, or maybe when both end up tied and it remains too close to call right up to polling day.

The Conservatives will be hoping desperately that this chapter does not remain unwritten.