A poll published this week by Lord Ashcroft suggested that, were the general election held tomorrow, Ukip would win the Tory-held constituency of Thurrock in Essex.

This caused a bit of a stir in political circles, not only at the prospect of Ukip gaining an MP, but also at Labour potentially failing to gain one of its very top targets.

Jackie Doyle-Price is the Conservative MP for Thurrock and she has a majority of only 92. That makes her the second most vulnerable Tory in the country, behind Dan Byles in Warwickshire North – although given that Byles has just announced he is standing down, technically Doyle-Price has inherited his dubious title.

This was the result at the 2010 general election: 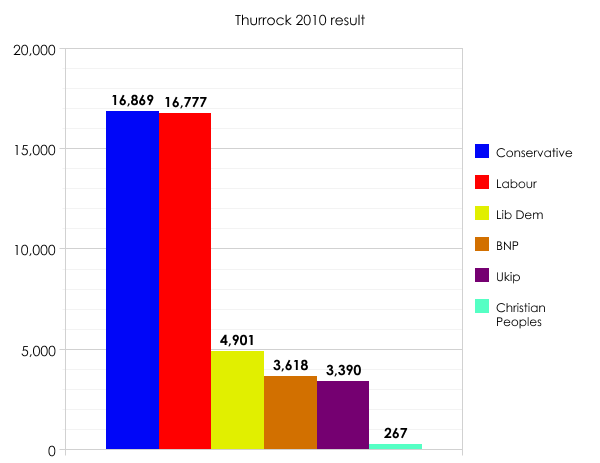 Come the 2015 general election Jackie Doyle-Price will face former BBC journalist Polly Billington, who is Labour’s candidate, as well as Tim Aker, currently Ukip MEP for the East of England.

Aker was understandably over-the-moon at Lord Ashcroft’s poll, saying: “This shows that the people of Thurrock are ready to make history next year… I truly believe Ukip can win.”

I suspect there will indeed by an upset in Thurrock at the election – but it won’t be that Ukip wins the seat. It will be that Labour fails to take it.

At the local elections in May, Labour actually lost control of Thurrock council. It was one of the most startling results of the night, with both the Tories and Labour ceding ground to Ukip, who went from having zero councillors to six (on a council of 49).

This poor performance by Labour was echoed in Lord Ashcroft’s poll. A few weeks ago when making my latest prediction of the general election result, I did wonder whether Thurrock had now slipped beyond Labour’s grasp, despite needing only a swing of 0.1% to change hands.

I still think it likely that it will elude them once again, but like 2010 it will probably be by a very small margin. And it is worth bearing in mind that Thurrock was a Labour seat from 1945 all the way through to 1987, turning Tory for just one parliament before returning to Labour in 1992 until 2010.

Despite only being an MP for Thurrock since 2010, she has established a profile both locally and in the south-east that is distinctive and energetic. She gives the impression of being a fighter and certainly doesn’t pull punches when telling her party where it’s going wrong.  She will be helped by a bit of anti-Ukip tactical voting and no doubt some very high profile Tory politicians dropping by to show their support. She will relish taking on both Ukip and Labour, and I suspect she will beat them both.

Who takes second place in Thurrock, however, is completely up for grabs.