The Conservative party’s most vulnerable seat in the country has just got even more vulnerable.

Dan Byles has announced he will not be seeking re-election as MP for Warwickshire North.

He won the seat in 2010 on an 8.1% swing from Labour’s Mike O’Brien, squeaking past his opponent to end up with a majority of just 54: 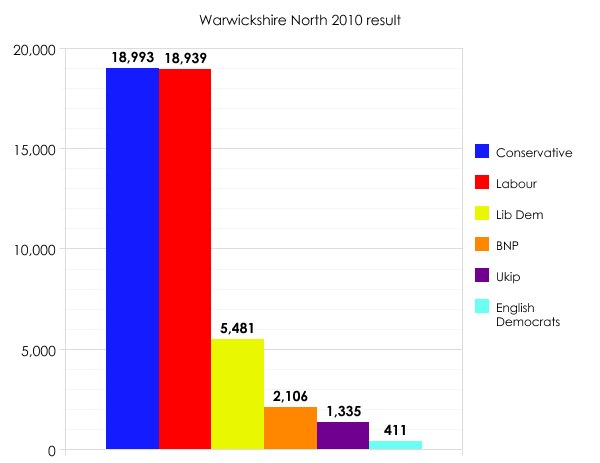 Since then Byles has been custodian of the least safe Conservative-held constituency in the UK. He was always going to face a tough battle in 2015, but up till now I believed he might hold on. His strong personality, coupled with the diverse demographic mix of Warwickshire North, encouraged me to think he’d be one of those Tories who might defy any nationwide swing to Labour.

Now he’s standing down, I’m more inclined to think the seat will change hands in May.

For one thing, whoever is appointed as the new Tory candidate will have only a matter of months to get dug in before the formal campaign begins.

But secondly, and more significant, is that they will be up against the person who Byles beat last time round. Mike O’Brien has been selected again for Labour, and like Andrew Dismore in Hendon, he’ll be eager to reclaim his turf.

O’Brien became MP for Warwickshire North in 1992. After Labour won power in 1997, he held a number of ministerial posts including immigration, energy and health, and also did a spell as solicitor-general. He emerged from the Labour years  – especially the Brown years – with a reasonable reputation, and his defeat in 2010 was a shock.

Now that Byles has bowed out, O’Brien has to be the favourite for 2015. Only if the Conservatives rustle up someone with an incredibly strong local profile and/or celebrity status might Warwickshire North have a chance of remaining in Tory hands.