The Ukip slide that was evident in the polls at the start of July has become more marked. Here’s how the party averages are looking halfway through the month: 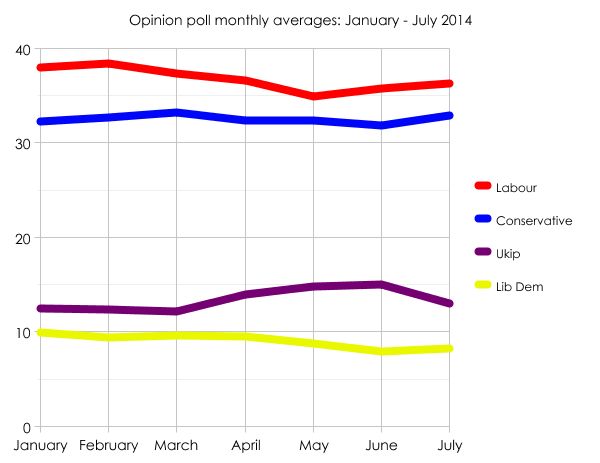 Ukip’s average is down a full two percentage points on June. The party is currently tracking at exactly 13%: above where it was at the start of 2014 (12.5%) but still the largest month-on-month change either up or down since March 2013.

Labour is currently tracking at 36.3%: half a percentage point higher than its average for June.

The Tories are on 32.9%, up a whole percentage point on June (and also up on their average of 32.3% earlier this month).

Even the Lib Dems seem to be benefiting. After three consecutive months of decline, they’re on 8.3%: a climb from their average for June of 7.9%.

Poll trends can feel like they behave in an utterly insular fashion. The mixed fortunes to beset both the Tories and Labour during the past few weeks appear to have had no negative impact whatsoever on the party’s respective ratings. To this end I doubt this week’s reshuffle, or the impending gaping summer recess, will cause any dramatic fluctuations in the averages. I suspect we’ll have to wait until the autumn and party conference season before anything manages to have a sustained influence on the poll trajectories.