If David Cameron decides to send an MP to Brussels to become the UK’s new European commissioner, we’ll have another by-election on our hands.

Andrew Lansley’s name has been mentioned an awful lot during the last few weeks, which means either he’s agreed to go and it’s a done deal, or Downing Street is indulging in a bit of bluffing to distract attention from what’s really going to happen in the reshuffle.

If it is Lansley, we’ll get a by-election in his constituency of South Cambridgeshire. It’s a seat Lansley has held since it was created in 1997, always with a majority of around 8,000. Not an incredibly safe Tory seat, then; we’re talking half the size of Patrick Mercer’s old majority in Newark. 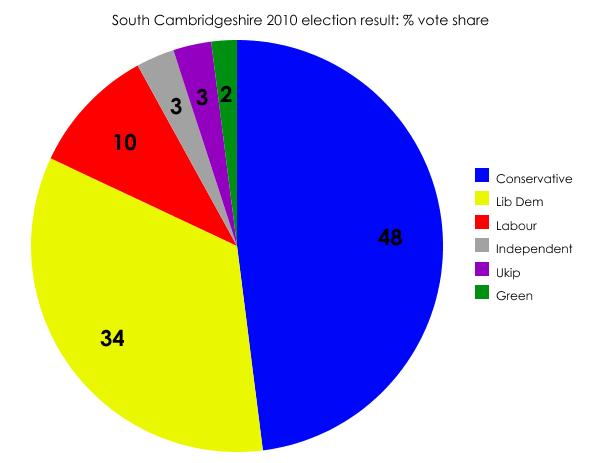 The result saw a slight swing away from the Tories and towards the Lib Dems, who increased their share of the vote at the expense of Labour.

Almost the whole of the constituency is covered by South Cambridgeshire district council, on which the Conservatives have a 13-seat majority. The composition of the council is currently Tory 35; Lib Dem 13; Independent 8; Labour 1.

Ukip has no presence on the council. The party came fifth in the constituency at the 2010 general election. Were there to be a by-election here, despite Lansley’s majority being half that of Mercer in Newark, I can’t see the result being anything other than a Tory hold. The Lib Dem vote would collapse, as per the trend, while Labour’s share would probably rise a little, meaning there’d be a battle for second place with Ukip.

But even though they wouldn’t win, Ukip would probably welcome the contest, as it means they would be talked about once again in the media. The party doesn’t really get any sustained publicity outside of elections, and – like all small parties – depends on them to give it the appearance of some momentum.

Short of by-elections such as the one that may or may not take place in South Cambridgeshire, Ukip will have to manufacture its own news if it wants to stay in the headlines. And that’s not always gone very well for the party in the past.