One of the first books I encountered when I started my A-level history course at school was by George Dangerfield. Its title was so punchy and intriguing that it has stayed with me ever since (a period of 22 years).

The book was called The Strange Death of Liberal England. It was cited as a key text on my course (and possibly still is) as a “way in” to comprehending the changes under way in British politics in the early 20th century.

Dangerfield was writing in the 1930s, so the events were still reasonably fresh in his and his original readers’ minds. Even so, he took great care to revisit in detail the issues and incidents he believed were responsible for the decline of the Liberal party from its position as the dominant force in government to a minority group of divided MPs.

Liberal England has undergone a similarly startling decline in recent years, though the start and end points are different. This decline has occurred during, and arguably because of, the Liberal Democrats’ coalition with the Conservative party in parliament. But unlike the deterioration of a century ago, which occurred after decades of intermittent Liberal governments, this one set in as soon as the party tasted power.

The decline has been most obvious in a loss of councillors: a trend once again in evidence in Thursday’s local elections.

Here are the Lib Dems’ net losses in councillors in each of the four sets of local elections to have taken place since the formation of the coalition government:

Since the 2010 general election, the party has seen a net loss of councillors totalling 1,515. That’s a staggering price to pay – or sacrifice to make – for entering government. In 2011 alone they lost 40% of the seats they were defending.

If I extend that graph back to 2003, when the Lib Dems scored their highest ever share of the vote at a set of local elections, you can see how starkly the party’s fortunes have changed: 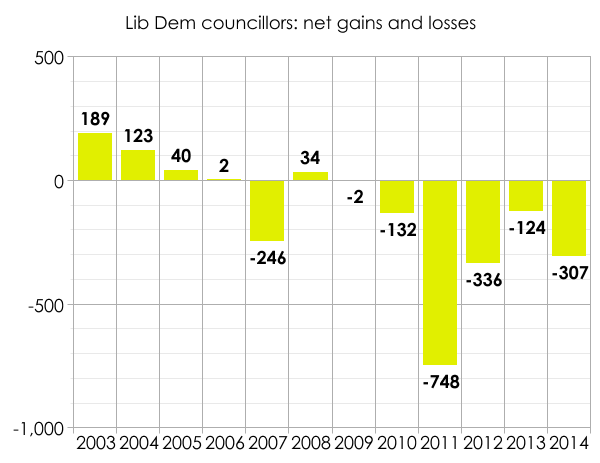 Yet even in 2007 and 2010, when they saw net losses of hundreds of councillors, the Lib Dems’ share of the vote held up. It’s only been since 2010 that the decline has really set in:

Of England’s 2,445 metropolitan councillors, just 191 are now Liberal Democrats. Four years ago, that number was 522.

And because above all, just like George Dangerfield’s “death” 100 years ago, there’s always the chance that it might not be terminal.

4 responses to ‘The strange death (again) of Liberal England’