While Labour’s average opinion poll lead has narrowed of late, the overall trend continues to suggest the next government will be one with either a small Labour majority or a hung parliament with Labour the largest party. As it has done since early 2011.

So is that it? All over?

I went back through some past elections to see what kind of precedent there’s been for opinion polls 12 months out from an election matching the actual result.

The one from recent history that most conforms to this idea is the election of 1983. Here’s a graph contrasting the poll averages from June 1982 compared with the eventual result in June 1983:

There’s a sense here that opinion barely shifted in the 12 months leading up to polling day. Indeed, in his diaries, Tony Benn records a meeting held after Labour’s defeat in 1983 at which a party executive acknowledged that “in the last 12 months, although we may have satisfied our activists, we haven’t satisfied the electorate.”

A more recent example is the 2001 election: 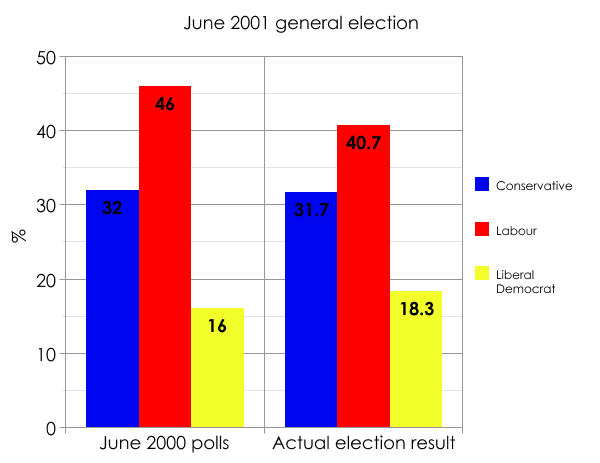 So firmly entrenched were people’s views of the main parties that even an event like the fuel protests of the autumn of 2000 could only disrupt the polls for 10 days, after which they quickly reverted to the norm.

The result of the 1997 election was long foretold, but it’s worth remembering just how enormous was Labour’s poll lead 12 months out from polling day…

…and how it shrank in the months up to May 1997, though not enough to affect the outcome.

The 2010 election witnessed a similar trend, and it’s useful to be reminded of how much ground Labour and the Lib Dems made up in those final 12 months:

So far so obvious. Four elections out of the last seven have shown the polls were broadly right 12 months ahead of the vote. But – and you knew this was coming – there are exceptions.

The most dramatic has to be in 1987, when Labour threw away a substantial lead:

It’s striking to see how unpopular Mrs Thatcher’s government was in the mid-1980s. It was almost in third place in the polls. Equally striking, however, is the way the party – then at the peak of its election-fighting powers – turned thing around. Some of that skill was still in evidence five years later:

Ought these two examples to be weighing on Ed Miliband’s mind? At the moment his average lead is smaller than that of 1986, but greater than 1991. It’s often said that support for an incumbent always grows as polling day nears, yet the examples of above show this isn’t always true. Times have also changed: we’re apparently in an era of four-party politics now, not three.

The other recent election I’ve yet to mention is that of 2005:

It’s something of an anomaly: support for both the government and the opposition falls in the 12 months to polling day, though neither ultimately affected the status quo. But the fact that Labour was able to form a government with just 35.2% of the vote undoubtedly gives hope to the present party leadership.

Finally, what was arguably the first election of the modern era: 1979. 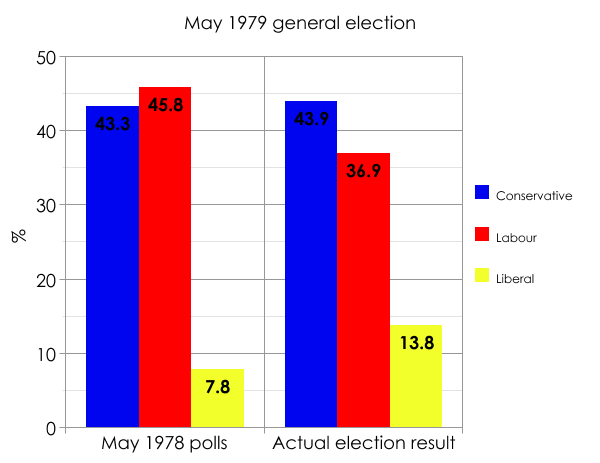 Odd to think of a time when two, never mind one, of the parties was regularly scoring above 40%.

Those figures for May 1978 will stir grim memories for long-serving Labour politicians who will forever wonder how Britain would look today had Margaret Thatcher not come to power in May 1979 and begun 18 years of uninterrupted Conservative government.

This graph provides one last lesson from history: polls are snapshots of public opinion, not predictions. It’s reassuring when, as is the case more often than not, what they say 12 months out from a general election does tend to match the actual result. But they don’t always do that, and what happened in 1979 is a good reminder of the reason they don’t: events.