Ukip is fond of talking about “metropolitan types”, usually in critical terms. Nigel Farage likes dropping caustic remarks about them into interviews, while his party’s supporters are equally frequent in their condemnation in the comments sections of online articles.

There’s nothing unconventional about this tactic. It’s a strategy familiar to all parties: give yourself and your followers something to rail about and rant against in order to boost morale, and in return help give your own party an identity.

But I foresee a problem with Ukip’s approach when applied to the local elections.

Put simply, most of those who’ll be doing the voting live in metropolitan areas. They are metropolitan types. Many are in the metropolis itself. What’s more, a sizable chunk of seats up for grabs are in councils that even bear the name “metropolitan”.

This wouldn’t matter quite so much were shire and county councils also going to the polls – areas with which Ukip can perhaps more easily identify and find sympathy. But they’re not. And this could mean that the number of council seats Ukip wins next week is way out of proportion with the support they appear to receive in the European elections held on the same day.

Take London. Every single seat in all 32 boroughs is being contested. That’s a total of 1,861 councillors to be elected. Rich pickings, maybe. Except at the moment, of those 1,861 councillors, only 19 belong to Ukip:

Such a low base will allow the party to trumpet any kind of advance as an achievement; winning 40 seats is, after all, an increase of over 100%. But having to start from such a tiny number it itself significant. Why hasn’t Ukip done better in the many local by-elections in London since the last time all the councils were contested in 2010?

A total of 36 metropolitan councils will see elections next Thursday, boasting between them a massive 2,441 councillors. They include places like Manchester, Leeds, Liverpool and Birmingham. Here’s how many of those 2,441 currently belong to Ukip:

Only a third of these seats are up for grabs this time. But that just makes Ukip’s task even more challenging. The same goes for the 19 unitary authorities with elections next week – places like Derby, Bristol, Peterborough and Warrington:

Four Ukip councillors out of nearly 1,000.

There is a fourth group of councils whose residents are going to the polls: the non-metropolitan councils. With a name like that, surely Ukip has been faring a little better of late?

I mention all of this not so much as a dig at the party, but more as a corrective to the sometimes over-representative coverage Ukip gets in the media. Its performance in actual elections to date has been very poor. Last year’s council results weren’t a surge so much as a skirmish. Maybe that will all change this time. But with so many metropolitan areas about to go the polls, speaking repeatedly of “metropolitan types” in a rather dismissive, negative fashion seems a rather counter-productive tactic by Farage and co. The party’s fate is largely in the hands of just such people.

Lumped together, the total number of councillors in all the councils in England with elections on 22 May comes to 8,477. I’ll leave you with a pie chart: 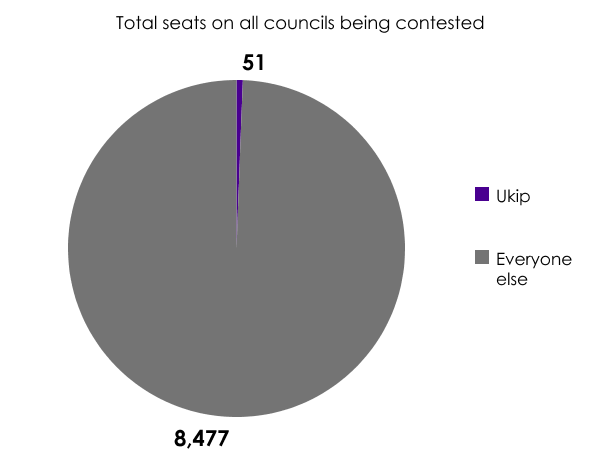