A year from today, the country will be waking up to find it has elected a new… what exactly?

A new government? Perhaps. But I think it’s unlikely. I doubt any party will have notched up the magic figure of 326 seats by breakfast time. That’s the number they need to win to have an absolute majority in the House of Commons – in other words, a majority of one over all other parties.

It may be that the figure of 326 isn’t reached until lunchtime, or even late afternoon. 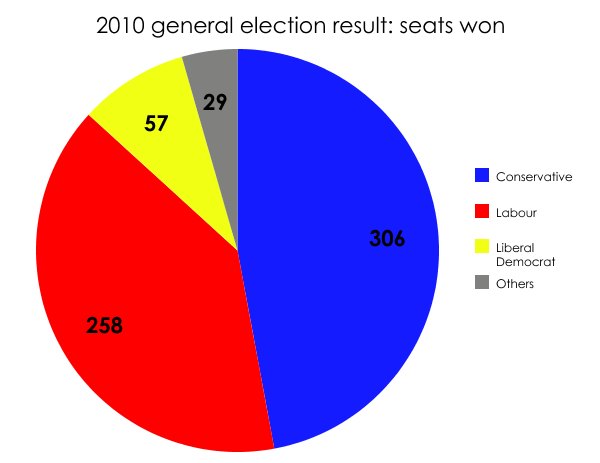 There are three possible outcomes to the 2015 election: a Conservative majority, a Labour majority, or another hung parliament.

Scenario one: a Conservative majority

For this to happen, the Tories need to win every single seat they won in 2010 (including Corby, which they lost to Labour in a by-election in 2012), plus a further 20 seats. This would give them a majority of one over all other parties: 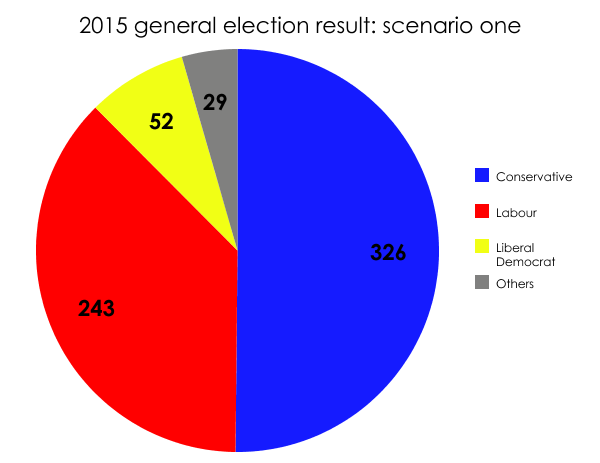 This would represent roughly a 2% swing from Labour to Conservative. If the 20 gains equated the Tories’ top 20 targets, among the victims would be the MP for Morley and Outwood: Labour shadow chancellor Ed Balls. The Lib Dems would lose five seats, including former health minister Paul Burstow in Sutton and Cheam, while Labour would lose a total of 15.

My instinct is this is too big a task for the Tories to accomplish. For them to hold every single seat, then gain another 20, feels implausible. I’m sure they will, at the very least, lose half a dozen marginals to Labour – which means they’d have to win even more new seats.

Equally unlikely, however, is…

For this to happen, Labour needs to not only hold all the seats it won in 2010 (including Bradford West, which it lost in a by-election in 2012), but win at least a further 68 seats. That’s an awful lot:

A swing of 5% would give them 326 seats and a majority of one, which in turn would reduce the Tories by 56 seats and the Lib Dems by eight.

Does this feel likely to you? Not to me. Not at the moment, at any rate.

My favoured outcome is this one:

Scenario three: a hung parliament with Labour the largest party

Here’s what the result would be were there a smaller swing to Labour of around 2%:

Labour is up 34: half the number it would need for a proper majority. The Tories are down 26, the Lib Dems down five and others down three (one Green, one Plaid, one SNP).

Precedent should mean that Labour, with the greater number of seats, would get first “go” at forming a government. But might Nick Clegg decide he’d be better served by staying in a Tory coalition? Would Labour be able to do a deal with the Lib Dems only if Vince Cable was allowed to be chancellor instead of Ed Balls?

All mere speculation, of course. But that’s one thing I can definitely predict we’ll get plenty of between now and polling day.

*Theoretical, because Sinn Fein never take its seats in the Commons.