Precisely how much is unclear about the outcome of the general election should be clear by early the following morning. Almost all of the results are due to be declared by 8am, meaning the negotiations, both formal and informal, could be well under way by breakfast time.

The latest estimate for the rate of declarations suggest we’ll hit a peak between 4 and 5am, after which things will tail off and dribble to a halt. Friday morning will probably see a few late declarations, before a scheduled mop-up of seven seats at lunchtime: 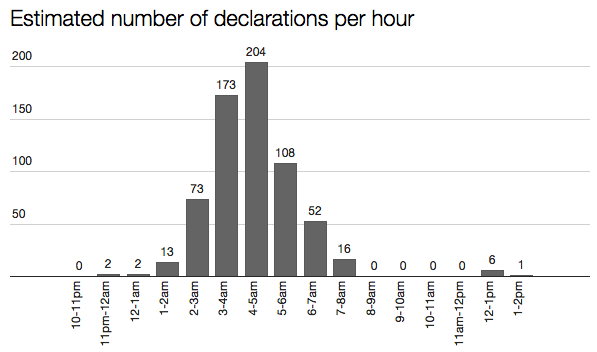 If you’re already thinking about how long to stay up, or whether to go to bed early then wake up when things are getting exciting, it looks like the key period will be from 3am onwards.

Here’s how the results should add up as the night unfolds: 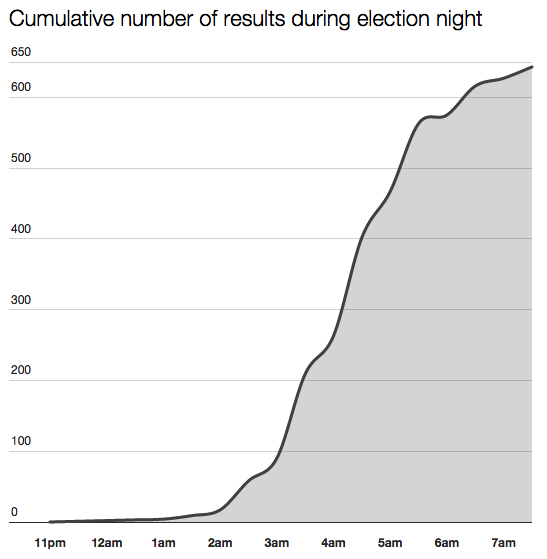 If everything goes to plan, 643 of the 650 seats will have declared within 12 hours of the polls closing. Everything won’t go to plan, of course. But let’s hope we won’t have to wait as long as 2010, when the final results (from East Ham and West Ham) weren’t declared until 8.30pm on Friday evening.

6 responses to ‘The bartering will have started by breakfast time’