Nick Clegg’s visit earlier this week to the constituency of Maidstone & the Weald, on account of it being one his party’s “top targets”, led me to wonder whether the Lib Dem leader hasn’t become a little demob happy. It also prompted me to dig out the list of what would, in a parallel universe, be the 20 seats most likely to fall to the Lib Dems at the election. 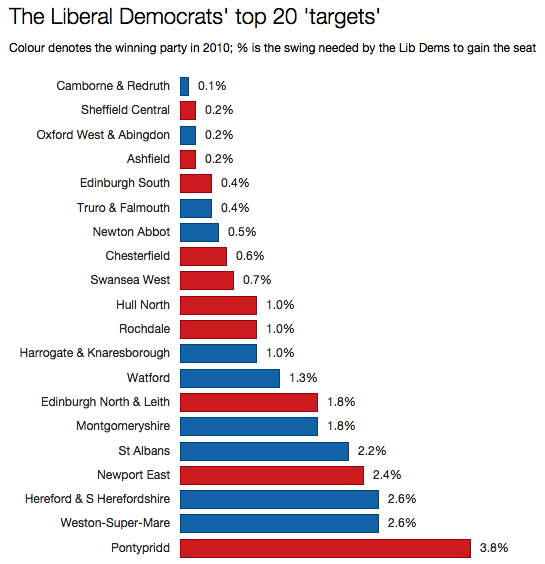 I’m quite confident that the party will not win a single one of these constituencies. Neither will it win Maidstone & the Weald. What was Nick Clegg even doing there? Yes, it was a stunt that won a few headlines, but the Lib Dems need a swing of 6% to take the seat. Even the “private polling” that Clegg cited as grounds for optimism showed his party four points behind the Tories.

I’d have thought his time and energy would be best spent campaigning alongside candidates in seats the party is defending, not making surprise forays into places in which he doesn’t stand a chance. But maybe he has been gripped by a bit of end-of-term dizziness. Either that or he thinks it’s 2010 all over again.