Following on from my look at the 10 highest turnouts in the 2010 general election, here are – you’ve guessed it – the 10 lowest turnouts: 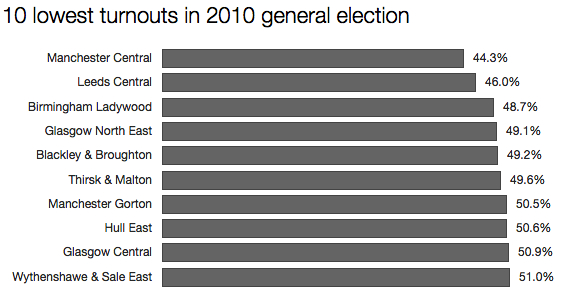 When it comes to this year, you’d have to say there was an extremely high chance of Manchester Central making it into the top 10 for the third time in a row. It’s an incredibly safe Labour seat and the kind of place where the Pirate Party can get more votes than Respect or the Monster Raving Loony Party. Saying that, in the 2012 by-election in Manchester Central the turnout was 59.7%, so voters in the constituency aren’t always more inclined to stay at home.

Of the 10 seats in the 2010 list, all are Labour apart from Thirsk & Malton. This is a Conservative seat, and its low turnout in 2010 almost certainly has something to do with the fact the contest was not held on polling day on 6 May but several weeks afterwards on 27 May, following the death of one of the candidates during the campaign. The winner, Anne McIntosh, has since been deselected by the Conservatives and this year will stand for reelection as an independent.

As for which seat will top the list for 2015’s lowest turnouts, I’m almost 100% certain its name will begin with either Manchester or Leeds.