Among the delights to be found on the BBC’s Genome website are some cracking examples of how the corporation used to cover elections on the radio.

In case you don’t know, the Genome site contains programme listings of every edition of Radio Times from 1923-2009. It’s an incredible resource and the sort of thing you can find yourself browsing for hours as you discover endlessly fascinating, historic and occasionally baffling broadcasts.

For example, here is how the results of the 1951 general election were introduced on the BBC Home Service:

How about that for an election programme? All the latest results, interspersed with the likes of exotically-titled Bernard Monshin and his Rio Tango Band, or the intriguingly-named Keg Leopold and his Players.

The coverage of the 1955 general election was no less mellifluous: 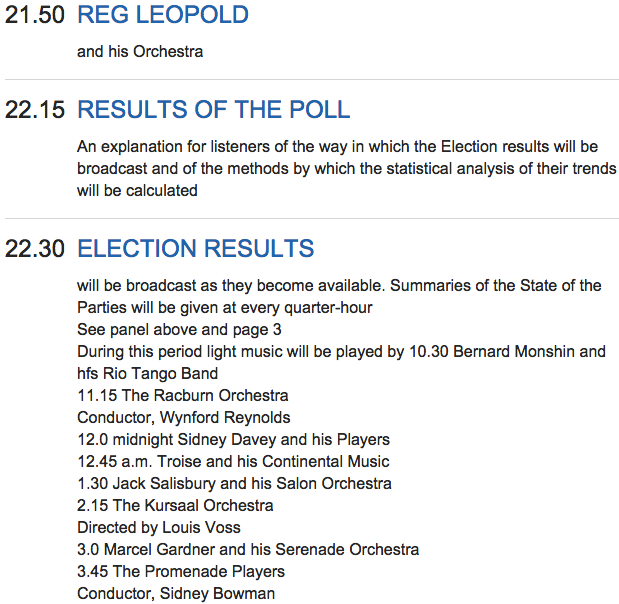 Note that Troise seems to have changed his act, swapping the ‘Mandoliers’ of 1951 for the more perfunctory ‘Continental Music’. Bernard Monshin’s Rio Tango Band was still going strong, however.

By the 1964 general election the Home Service’s election coverage had become more substantial, dropping the entertainment and focusing exclusively on results and analysis:

I particularly like the subtitle ‘It’s Anyone’s Guess’. This format continued through the night, with a segment called ‘Straws in the Wind’ at 10pm and ‘The Pattern Takes Shape’ at 11pm.

Hardiman Scott was still there a decade later for the February 1974 election:

There’s plenty more of this throughout the Genome archives, which cover both radio and television. You can even go right back to 1923 to see how the outcome of a general election was reported by the BBC for the very first time – live and direct from the Savoy hotel.

What chance of a dance band to pep up this year’s coverage?