I’m completing my tour of the electoral map near where I began: in southern England. The three counties of Gloucestershire, Hampshire and Wiltshire are almost solid blocks of blue. But both Labour and the Liberal Democrats have a presence in the region, and Labour could well increase its toehold come the election: 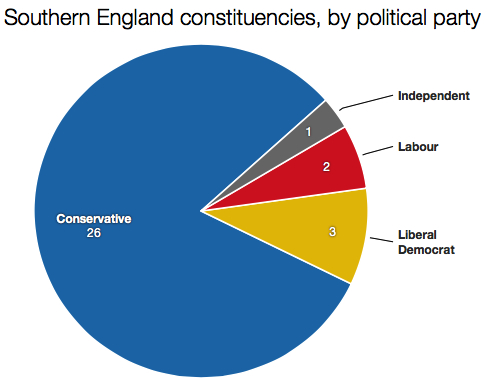 The independent is Mike Hancock in the seat of Portsmouth South. He was a Lib Dem until he formally resigned from the party in September 2014 following a civil court action brought by a female constituent. Hancock has yet to say whether he will contest Portsmouth South at the election as an independent, but the Lib Dems have already chosen a fresh candidate. The Tories are also hoping to take the seat, though Hancock had a majority of 5,200 at the 2010 election and it’s hard to predict to what extent the city’s Lib Dem supporters will stay faithful or go elsewhere.

The two Labour seats are both marginals: Southampton Test, where Alan Whitehead won a majority of 2,413 in 2010, and Southampton Itchen, where John Denham secured victory by just 192 votes. Both are Conservative targets, and with Denham not standing this time, the result in Itchen could be extremely close once again. Labour’s new candidate is the journalist Rowenna Davis. There’s a chance she might end up being witness to the only seat in the country that the Tories gain from Labour.

Up to three Tory marginals could fall to Labour in this region: Stroud, Gloucester and Swindon South. A couple of gains here for Labour could prove some consolation for the potential loss of Southampton Itchen. The Tories’ two other marginals of Winchester and Romsey & Southampton North are perfectly safe, thanks to the next largest party being the Liberal Democrats: 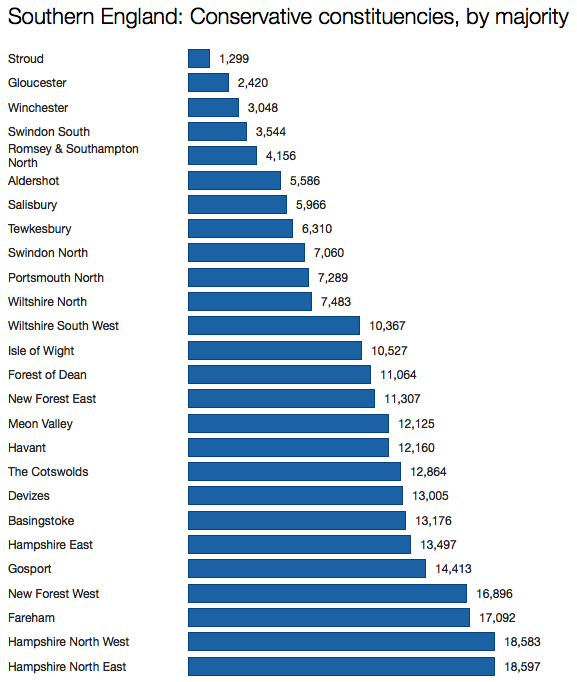 As for the Lib Dems, every one of their three seats is vulnerable. The Tories are eyeing them all, although Ukip is notionally in second place in Eastleigh after coming runners-up in the 2013 by-election:

In this region as in every other across the UK, the Lib Dems will only go in one direction at the election, and that’s backwards. Mike Thornton may survive in Eastleigh, but Duncan Hames in Chippenham will struggle to hold on. If things are particularly bad, even Martin Horwood could lose in Cheltenham – a seat the Lib Dems have held continuously since 1992.

In both the south and south-west of England, the Liberal Democrats could end up seeing generations of advances reversed or wiped out.