This is barely a change on the averages for November, and represents something of a slowdown after the movements of the past few months – as this graph shows: 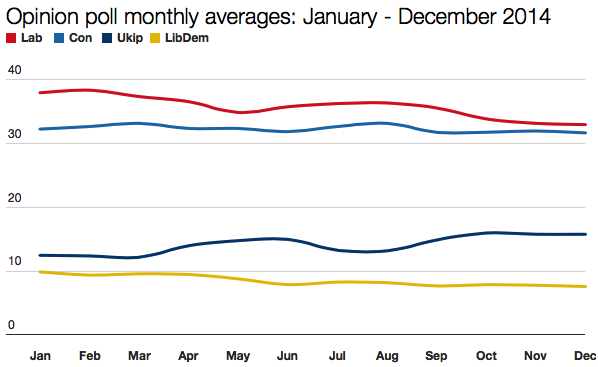 Making sense of movement in poll trends is an elusive business. There can be as many answers as there are people interested in the question. It’s also self-determining. I have chosen to depict poll trends in monthly averages. But I could illustrate them in other ways.

For example, I could use the averages of all the polls published during the last seven days. This produces scores of Labour 33.6%; Conservative 32.3%; Ukip 14.9%; Liberal Democrats 8.1%. Compare these with the averages for the whole of December so far, and the seven-day scores are slightly better for Labour (up 0.6 points), the Tories (also up 0.6) and the Lib Dems (up 0.5), while being slightly worse for Ukip (down 0.9).

I could also look at the averages for the past four weeks. This produces scores of Labour 33.4%; Conservative 32.1%; Ukip 15.7%; Liberal Democrats 7.5%. Again, slightly better for some parties and not for others. But when I put the three sets of figures side by side, you get a sense of how small are the differences: 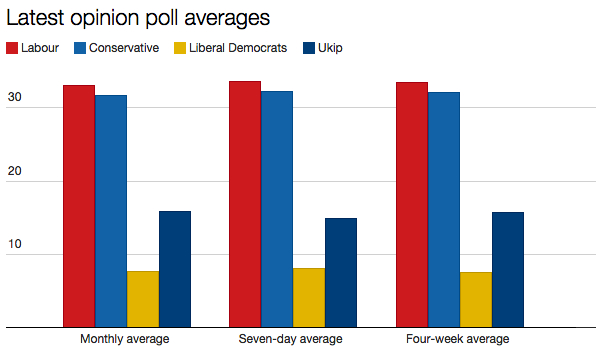 What does all this show? That the opinion polls are not moving an awful lot at the moment. We seem to have entered a period of relative calm.

But remember these are nationwide polls, and do not reflect variations in support at a local level, in particular in Scotland. They tell us nothing about the state of play in each constituency; nor are they predictions of the result, merely snapshots. In short, they don’t tell us much about the election that is actually useful. Bear that in mind the next time you read a newspaper headline about an opinion poll “shocker”.

One response to “Poll update: how to make sense of not very much”