Jim Murphy, Labour’s new leader in Scotland, has wasted no time in signalling the extent of his ambition. He told the BBC on Sunday he is “determined” his party will not lose a single seat to the SNP at the general election. This is despite a string of opinion polls suggesting Labour is destined for near-wipeout across the nation.

Murphy’s pledge is the kind of bold talk a newly-appointed leader can get away with in their honeymoon period. But it’s also the sort of announcement Sir Humphrey Appleby of Yes, Minister would describe as “courageous”, meaning foolhardy. “A controversial policy will lose votes,” Sir Humphrey explained, “whilst a courageous one will lose the election.”

Labour is clearly facing a major fight in Scotland. It is one that up until a couple of months ago it did not expect, and for which it is not really prepared.

But on closer inspection the fight will not be as one-sided as the polls currently imply. Nor will it be a fight for Labour’s survival.

I’ve looked at how easy or difficult it would be for the SNP to gain each of the 41 Scottish seats Labour won at the 2010 general election.

I’ve examined the swing needed for the SNP to take the seat, whether or not Labour is fielding the incumbent MP or a new candidate, and in what position the SNP came in 2010.

There are no easy seats for the SNP to win from Labour. This is not a new observation, but it’s one that often gets overlooked in some of the breathless reporting of the latest Scottish polls or political in-fighting.

The truth is no Labour constituencies would fall to the SNP on a swing of 5%. For one seat to change hands, the party needs a swing of 5.2%, which would deliver them Ochil & South Perthshire.

And it doesn’t get any easier. Just three of Labour’s 2010 haul of 41 seats would fall to the SNP on a swing of 10%. As the following chart shows, only when the SNP’s swing gets above 10% are the greatest number of Labour seats at risk: 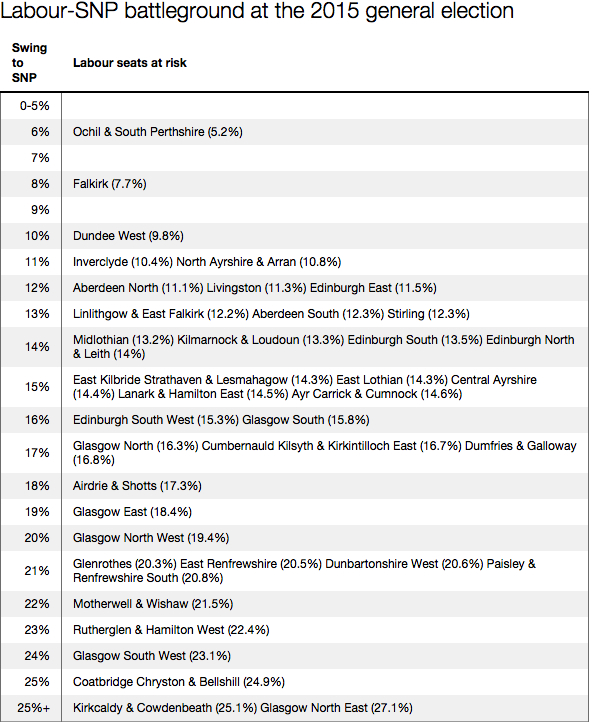 Swings of up to 15% have tended to be very rare in British politics and extremely difficult to achieve on a consistent basis by one party. Uniform swings, while a useful guide to trends in elections, are not that common in reality. The swings suggested by recent opinion polls in Scotland have been between 15-20%. But this should not be interpreted as meaning the SNP will take all the Labour seats that need a 20% swing to change hands. Each constituency will behave in a different way. That’s why I’ve looked at two additional factors: whether the Labour candidate is an incumbent, and how the SNP fared in 2010.

Where Labour is fielding a brand new candidate, I’m making the assumption (not a prediction!) that the SNP’s chances will be improved. And where the SNP did not come second in 2010, I’m presuming the reverse.

So far we have five new Labour candidates contesting seats in 2015. Two are in seats needing relatively small swings to fall to the SNP: Falkirk (7.7%) and Aberdeen North (11.1%). The others are Alistair Darling’s seat of Edinburgh South West (15.3%), Glenrothes (20.3%) and Gordon Brown’s seat of Kirkcaldy & Cowdenbeath (25.1%).

But while this might tend to make Edinburgh South West a more likely SNP gain, the nationalists only came fourth in the seat in 2010, which suggests a victory is more of a challenge.

In fact, while the SNP are currently in second place in the majority of Labour’s seats (28), they lie third in seven and fourth in six.

Now it may prove to be the case that support across Scotland for Labour, the Tories and the Liberal Democrats all collapses in the SNP’s favour, which would make victory in these kinds of seats more feasible. But I don’t quite believe this will happen – at least, not in a uniform fashion.

As such I’m “downgrading” the SNP’s chances in some of these seats, though I’m not ruling out victory altogether. Instead I’ve used this information, along with the data on swings and incumbency, to draw up the following survey of the entire Labour-SNP battleground. I’ve grouped the 41 seats into categories based on how much of a struggle I think it will be for the SNP to win.

These six seats are the SNP’s best chance of gains and the ones I think Labour is most likely to lose. I suspect all of these will change hands at the election.

The SNP will have a good chance in these seats and Labour will struggle to hold them all. If Labour loses everything in categories one and two, it will be down 14 Scottish seats on 2010.

Category 3: tricky but not impossible

The SNP is third or fourth in most of these seats, and together with the bigger swings this makes them more of a challenge. There might be some gains here, but they won’t all fall on a uniform swing.

The combination of incumbent Labour MPs and very large swings makes SNP gains in this category very unlikely. For these seats to change hands would be remarkable (though not impossible).

I think these are all beyond the SNP’s grasp, though the party may end up in a strong enough position to make a real challenge at the 2020 general election.

On the basis of current poll trends, if Labour limits its losses in Scotland to seats only in categories one and two, I think that could be classed as a “good” result. The party will still have a majority of its Scottish MPs, and a drop of 14 seats would probably not be enough to damage its chances of being the largest overall party in parliament.

Add in category three, however, and Labour’s losses would be up to 23 and election success increasingly unlikely. Any further down the list would be a disaster. Ironically, one of the few survivors of such an outcome would be none other than Jim Murphy. His seat of East Renfrewshire is among the eight constituencies that I predict to withstand an SNP landslide. I rather suspect this would be scant consolation.

2 responses to ‘Labour v SNP: a guide to the battleground’