The Tories gave the impression of being taken by surprise at how well Labour did in London in May’s local elections. They seemed particularly caught out by Labour taking control of Hammersmith & Fulham, supposedly David Cameron’s “favourite” council.

The party will need to make sure it doesn’t repeat these mistakes at the general election. For London is one part of the country where the Tories face a real fight to hold on to seats and where Labour could well do better than anywhere else in the UK. 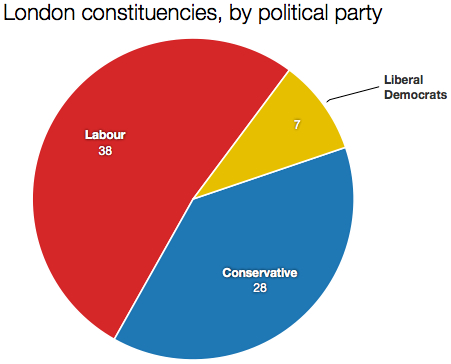 Here are the key election statistics:

Opinion polls have suggested that the swing to Labour in the capital is likely to be higher than other regions, and that seats which would be safe even in the rest of southern England would change hands. This threatens both the Tories and the Liberal Democrats, and it’s highly likely that Labour’s current total of 38 London constituencies could rise by almost a quarter come polling day.

The Tories are defending seven marginal seats in London. It’s quite possible that all of them, bar Richmond Park (where the Lib Dems are in second place), will fall to Labour at the election. They might even lose the likes of Ilford North and Finchley & Golders Green if things go particularly badly. A cull of that size would reduce their number of London MPs from 28 to 20. 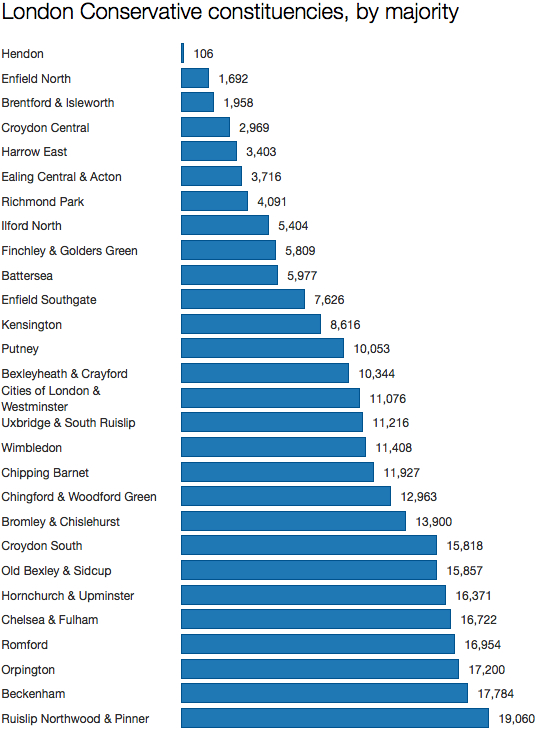 The Tories are targeting some Labour seats, but I doubt they will win a single one. Their efforts in London would be best served defending the constituencies they already hold – particularly the likes of Harrow East and Ealing Central & Acton. These are both seats that Labour needs a swing of around 4% to take: higher than that suggested by current opinion polls, but not implausible if the anti-Tory feeling in the capital is as widespread in May 2015 as it was in May 2014.

The list of Labour seats in London is so long that I’ve divided it into two. First, the seats with the smallest majorities:

Glenda Jackson is standing down in Hampstead & Kilburn, but Labour candidate Tulip Siddiq will have no problem holding the seat. The Liberal Democrat vote will collapse here, as it will across London, allowing Labour to increase its majority in most of the constituencies on this list. The Tories will want to make a show of targeting the likes of Harrow West and Hammersmith, but they’d be wise to look to the safety of their own seats before trying to grab those belonging to others.

The remainder of Labour’s London seats won’t be moving into anyone else’s column anytime soon: 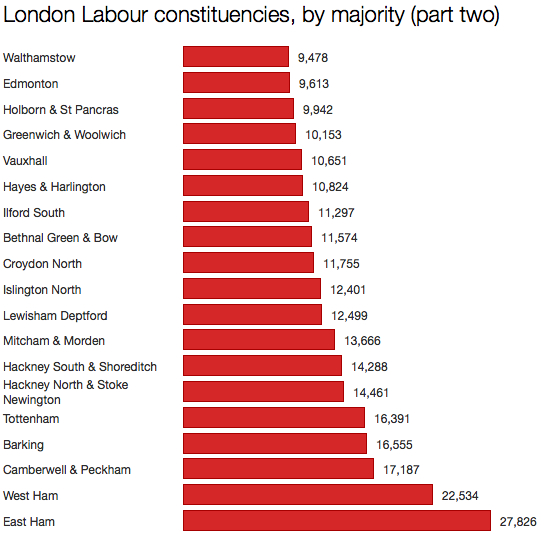 Thanks to the size of some of the Lib Dems’ majorities in London, this won’t be the kind of wipeout we’re likely to see in other metropolitan areas. Labour will take Brent Central and probably Hornsey & Wood Green, but the rest might all be safe. I’ve long thought Paul Burstow in Sutton & Cheam will defy the national trend and fend off the Conservatives. Labour may talk up its chances in Simon Hughes’ seat of Bermondsey & Old Southwark, but I suspect such an outcome will prove to be too big an effort.

One party that won’t be in contention in any seat in London is Ukip. We may see it polling some of its lowest shares of the vote in the capital, along with dozens of lost deposits. But for a party that defines itself as anti-metropolitan, this should not be a surprise.

One response to “London: a capital concern for the Conservatives”