No gains for the main parties this week. The only seats to change hands in Thursday’s council by-elections were won by independents – in one case, from another independent:

The politics of Canvey Island are intriguing if a little tortuous. There is a local town council that only came into existence following a petition in 2007; there is representation on Castle Point borough council, for which the Canvey Island Independent Party was formed in 2003 by an ex-Labour deputy council leader; and there is further representation on Essex county council. As you can see, there are sub-divisions of independents within the community. No wonder the established parties do not loom large.

The other seat to change hands this week was on Labour-run Telford & Wrekin borough council, where an independent made a gain from the Tories: 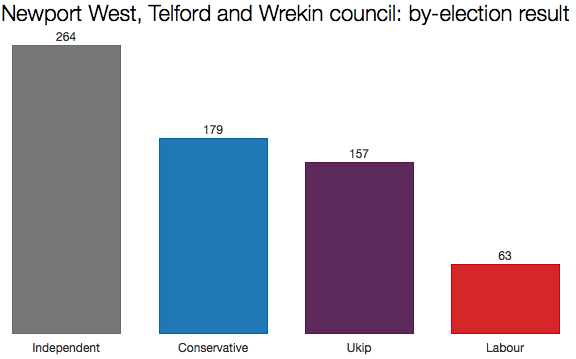 A second seat was also being contested on the same council, and Labour held it comfortably.

In two other by-elections, Labour held a seat on Neath Port Talbot council (with Ukip pushing the Tories into a distant third place) while the SNP held a seat in North Ayrshire.

In the Press Association’s analysis of 23 comparable results across the whole of October, Labour came out just ahead of the Tories with a 0.5% projected nationwide lead.

A calculation based on 12 wards fought both times by all three major Westminster parties gives a line-up of Conservatives 35.3%, Labour 34.0%, Liberal Democrats 15.6%. Ukip averaged 26.2% in the 20 wards it contested.