In the next stage of my tour of the electoral map, I’m going to look at the main metropolitan areas in England. I’m starting with the West Midlands – not the entire region, but rather the county.

It covers the cities of Birmingham, Coventry and Wolverhampton, along with Dudley, Sandwell, Solihull and Walsall.

This is an area with a huge population: almost three million, according to the Office for National Statistics. A total of 28 constituencies lie within its border, two-thirds of which are currently held by Labour. 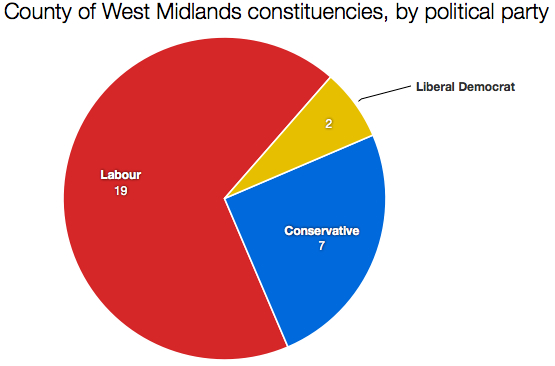 It’s one of the biggest conurbations in the country. Yet it could see one of the smallest turnovers of seats at the election.

Here are the key election statistics:

Only one of the 28 seats is a so-called uber-marginal (a majority below 1,000), and while there’s a generous number of marginals (majorities under 5,000), I don’t expect many to change hands. The biggest loser could well prove to be not Labour or the Tories, but the Lib Dems.

Nick Clegg’s party has only two seats in this region. It will almost certainly lose both of them.

Solihull is one of the Tories’ top targets. Birmingham Yardley is virtually a dead-cert for Labour. I think we can expect to say goodbye to the Liberal Democrats in the West Midlands come polling day. The party isn’t even in second place in any of the marginals. A pragmatist would accept there are no battles worth fighting here, and concentrate resources elsewhere in the UK – in particular, south-west England.

Of the Tories’ seven seats in the West Midlands, three are at risk of falling to Labour. Chris Kelly’s decision to stand down as MP for Dudley South has made a Labour victory more likely than were he staying put. Paul Uppal’s seat of Wolverhampton South West ought to be a very easy Labour gain. Lord Ashcroft’s latest poll of Halesowen & Rowley Regis found Labour ahead but by only one point. It’s the sort of seat that may elude Labour if the swing on election day turns out to be much lower than that suggested by the current opinion polls.

The range of Tory majorities in the West Midlands – all the way from 691 to 17,005 – reflects the enormous variety and demographic mix of the region. The party is also the challenger in nine Labour marginals. At the moment, my instinct is they won’t win any of them. But there’s the potential for a shock result if a Ukip intervention sucks support away from one or both of the main parties, and there’s a below-average turnout.

Labour dominates the West Midlands. But the 2010 election left the party with an awful lot of marginals in this region: 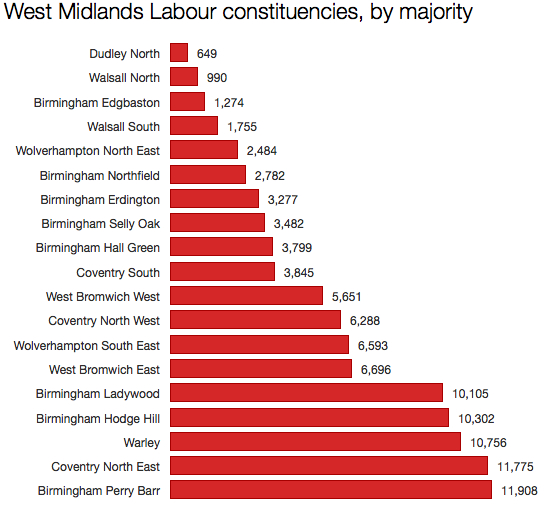 In every one of Labour’s seats with a majority below 5,000, the Tories are in second place – with one exception: Birmingham Hall Green, where the Respect party came second in 2010.

Labour ought to be able to defend these seats, so long as they don’t take them for granted (as seemed to be the impression in the Heywood & Middleton by-election). I doubt Ukip will make any inroads into the metropolitan seats.

Some of the suburban constituencies may prove more fertile ground, however, and here Labour will hope that enough of the Lib Dem vote will collapse in its direction to offset any parallel seepage from Labour to Ukip.

Labour should emerge from the election with a larger presence in the West Midlands, but the gains could be modest. The party may manage only to grab Birmingham Yardley from the Lib Dems and Wolverhampton South West from the Tories. With the Conservatives simultaneously taking Solihull from the Lib Dems, the region will become a two-party battleground – albeit with a brand new third party (Ukip) ready to step in as an alternative.