The second largest by-election ever held in the UK takes place at the end of this month.

Voters in South Yorkshire go to the polls on 30 October to choose a new police and crime commissioner.

I really thought we’d seen the last of these kinds of contests. PCCs have never caught the public’s imagination; fewer than one in 10 voters took part in the PCC by-election in the West Midlands in August; and both Labour and the Liberal Democrats have now said they would scrap PCCs if they win the general election.

But then came the resignation of Shaun Wright following the Rotherham child sex abuse scandal, and hence the contest at the end of the month, nominations for which closed a week last Friday.

The Lib Dems have shown precisely how little regard they have for PCCs by not even bothering to field a candidate. There will be only four names on the ballot paper, all male:

This will be Allen’s second campaign for South Yorkshire PCC. In November 2012 he was runner-up to Shaun Wright, coming ahead of both the Tories and Ukip: 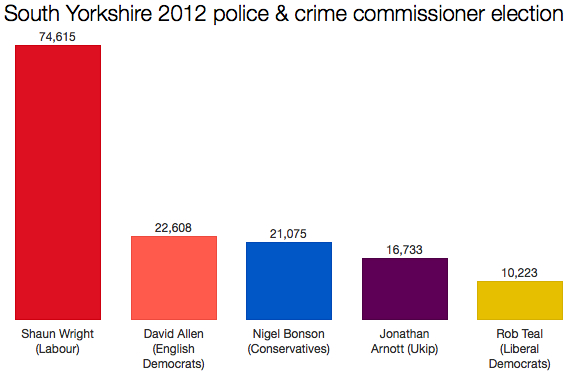 The result is once again being decided using the supplementary vote (SV) system. This means that if nobody wins more than half the vote on the first count, all candidates bar the top two get eliminated and their alternative preferences allocated to the survivors. Whoever emerges with the most number of votes after this round is declared the winner. Shaun Wright was elected on the first round in 2012, having gained 51% of the vote:

The turnout in the West Midlands by-election was 10.2%. Will this one be even lower? We’ll know once the counting is over, which will take place on Friday 31 October in the appropriately functional surroundings of Barnsley’s Metrodome leisure centre.