Glance at the current state of play in this region and you’ll have a few prejudices shaken.

Roughly a third of the constituencies are held by the Tories, for instance. Yorkshire is not and never has been a vast homogenous block of left-leaning millions. Long gone are the days of mythical “socialist republics”. Today, the entire county of North Yorkshire is Conservative, bar one seat (York Central). Conversely, there is not a single Tory seat in South Yorkshire. West Yorkshire is the most diverse of the counties, and it’s where you’ll also find this region’s (and the UK’s) sole Respect MP.

The Tories will be defending seven marginals in Yorkshire at the election. Three are seats where the Lib Dems are in second place (Harrogate & Knaresborough, York Outer and Colne Valley) and all should be safe. The other four are Labour targets, and at least one ought to change hands: Simon Reevell’s seat of Dewsbury. Pudsey and Keighley will fall if current opinion polls are correct, but I suspect Alec Shelbrooke in Elmet & Rothwell will be safe. 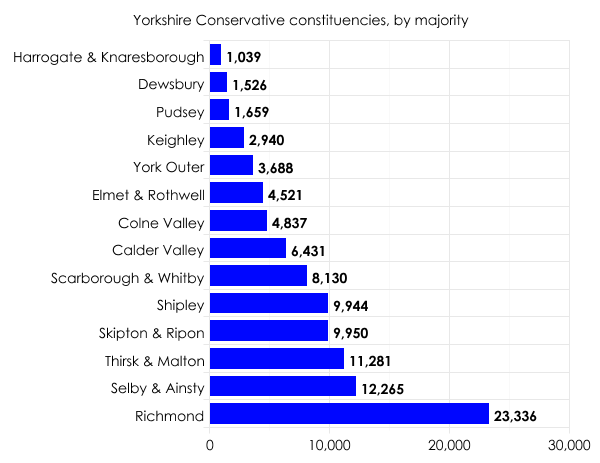 Most of those hefty majorities are in North Yorkshire. Now that William Hague has announced he is standing down, his ultra-ultra-safe seat of Richmond must surely be attracting dozens of Conservative hopefuls.

The Tories’ targets in Yorkshire are all Labour seats. The smallest majority they have to overturn is 1,101: but that’s in Morley & Outwood, the seat of Labour shadow chancellor Ed Balls. With no Lib Dem scalps to collect in Yorkshire, I suspect the Tories may make no gains in this region at all.

The Lib Dems’ have three seats in Yorkshire. Two are safe; the third, Bradford East, will fall to Labour – of that I have no doubt.

There are four marginal seats in the region where the Lib Dems are in second place. As I’ve said on this blog before, in any previous election the party would be hoping to target these seats as potential gains. Not this time. Three of those four are Tory seats – as mentioned above; the fourth is the Labour seat of Sheffield Central, where Paul Blomfield has a majority of just 165. He’ll be fine.

Blomfield tops the list of Labour’s 26 seats in Yorkshire, 10 of which are marginals. All should be safe, despite some of their tiny majorities. Interestingly, nine of the 10 are seats where the Tories are the challengers. Only Sheffield Central has the Lib Dems in second place.

This preponderance of marginals is a legacy of the 2010 election, but I suspect the Tories’ advance into Labour’s Yorkshire strongholds has peaked.

As for Labour targets, there are only five. Bradford East (Lib Dem) and Dewsbury (Conservative) they should take fairly easily. The other three, Pudsey, Keighley and Elmet & Rothwell (all Conservative), are perhaps more of a challenge and will need swings of up to 4%.

That just leaves the seat held for the Respect party by George Galloway: Bradford West. He’s got a majority of 10,140. If he wants to hold the seat, and if he can be bothered to campaign in the way he did in the 2012 by-election, I’m sure he can win again. But he has yet to confirm he is standing in 2015, and has previously given the impression of wanting to move elsewhere – maybe even try for mayor of London.

If Galloway doesn’t seek re-election, I’d expect Labour to retake Bradford West. It wouldn’t count as a “gain” when compared with the 2010 general election, but Labour would be exceptionally happy to see the seat back in its column.

Overall, of the 44 seats in the Yorkshire region, it might be that as few as two end up changing hands. Despite the many big names who currently hold constituencies across the area – Ed Miliband, Ed Balls, Yvette Cooper, Nick Clegg, David Blunkett, William Hague – this is not a place where the general election will be won or lost.