Since I began this blog I’ve resisted joining the rolling revue that is “Boris Johnson: will he or won’t he – and if so, where?”, something that has bewitched much of the media for the best part of two years.

Resisted until now, that is. I’m giving in only because the man has confirmed one of the worst-kept secrets in British politics: that he would like to return to parliament at the 2015 general election, and will therefore break his pledge not to become an MP before the end of his second term as London mayor in 2016.

Johnson will have to move quickly if he wants to find a safe seat near London: local associations are already holding contests and most will want their candidates in place by the autumn, if not before the Tory party conference (which starts on 28 September).

Uxbridge & South Ruislip is the seat that presents itself as one of the best prospects for Johnson and whose personality and history would fit the man with generous ease.

The constituency has been in existence only since 2010, but both it and its predecessor of Uxbridge have been represented by Sir John Randall continuously since 1997.

Randall has already said he will be not standing for re-election in 2015. His family’s furniture store, Randalls of Uxbridge, could be said to typify the man it is rumoured wants to be his successor as MP for the constituency: stuffed full of eccentricities, it attracts as many patrons as it repels, keeps atypical business hours, and wears its manners lightly and its heritage heavily.

Johnson would not have to work hard to win this seat. It is safe Conservative territory. Randall’s majority in 2010 was 11,216:

Its forerunner constituency of Uxbridge was a Tory seat continuously from its creation in 1885 to its demise in 2010, bar Labour interludes from 1945-59 and 66-70. Both Labour (Chris Summers) and Ukip (Jack Duffin) have already picked candidates for the 2015 contest.

If he didn’t fancy Uxbridge & South Ruislip, an alternative for Johnson might be Hertsmere, where James Clappison has announced he is standing down, and which is an even safer seat: 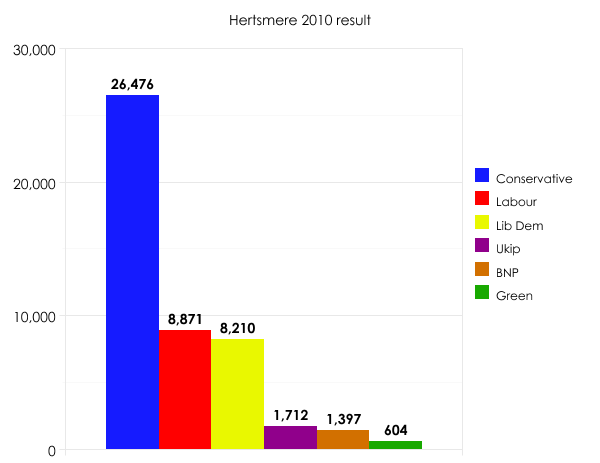 In truth, Johnson would not actually contribute very much to the Tories’ hopes of winning the election by standing in somewhere like Uxbridge & South Ruislip or Hertsmere.

If he really wanted to make a difference, he should seek out a marginal seat or one of Ukip’s targets.

By merely contesting a safe seat, Johnson will have a minimal impact on the election’s mathematical outcome – which at the end of the day is the only outcome that matters.

Fighting a marginal seat would be too much effort and carry too much risk, you suspect, for a man whose priority is simply getting back into parliament – regardless of which party ends up in power beyond 2015.