After taking a look at one of Labour’s sparsest regions, I thought I’d jump from one corner of England to the other and examine one of its safest.

North-east England is Labour’s heartland. The party holds 25 of its 29 constituencies, and could well add to this number at the election.

Here’s how those 29 seats are currently distributed:

Here are some of the region’s key electoral statistics:

With a little over a quarter of its seats counting as marginals, the north-east will probably be one of the regions that sees the least number of constituencies changing hands in May.

Here’s how things look for each of the main parties:

Labour enjoys some of its largest majorities in the country in this region. Grahame Morris in Easington has the eighth-safest Labour seat (ranked by majority) in the whole of the UK. This is the full list of all 25 constituencies: 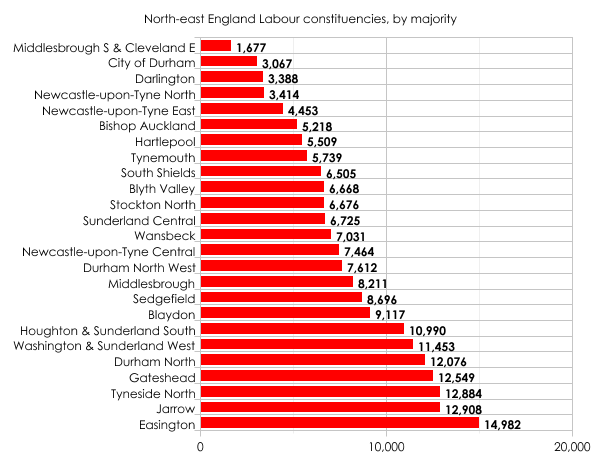 I really can’t see any of these changing hands at the election, though Tom Blenkinsop’s seat of Middlesbrough South & Cleveland East is a top Tory target.

I suspect the only changes we’ll see in this region will be in those constituencies currently held by the Conservatives and the Liberal Democrats.

Both Alan Beith in Berwick-upon-Tweed and Ian Swales in Redcar are standing down at the election.

The Tories will hope this increases their chances in Berwick, but I think a more likely gain will come for Labour in Redcar. It’s not technically a marginal seat, but if the swing from the Lib Dems to Labour is running higher than elsewhere in the country, Redcar will move back into the Labour column. The party held the constituency since its creation in 1974 right through to 2010.

If they do win Redcar, Labour’s tally for the region will go up from 25 to 26. I rather suspect it will end up at 27, at the expense of the…

James Wharton in Stockton South will be fighting for his political life. Not only is he the MP for the region’s only ultra-marginal, he has the sixth smallest Tory majority in the country. A 0.3% swing would see the seat fall to Labour. A recent poll by Lord Ashcroft found the swing currently running at 2%: lower than the national average but more than enough to see Labour candidate Louise Baldock triumph. Labour held the seat from 1997 to 2010.

Even if Wharton loses, however, the Tories can take comfort that they’ll still have one person in the north-east. Guy Opperman – high-profile supporter of such decidedly non-Tory ideas as a mansion tax and a living wage – ought to be safe in Hexham.