…is looking for a new incumbent.

Joe Benton, Labour MP for Bootle since 1990, has announced he is stepping down next year.

Benton was born in 1933, and is one of the very few serving MPs to remember Labour’s landslide victory of 1945. He says he wanted to carry on beyond 2015, but that his local party were unhappy with his low national profile.

As such a vacancy has arisen for what could be, if the lucky candidate so desires, a seat in parliament for life.

Here’s the Bootle result at the last election: 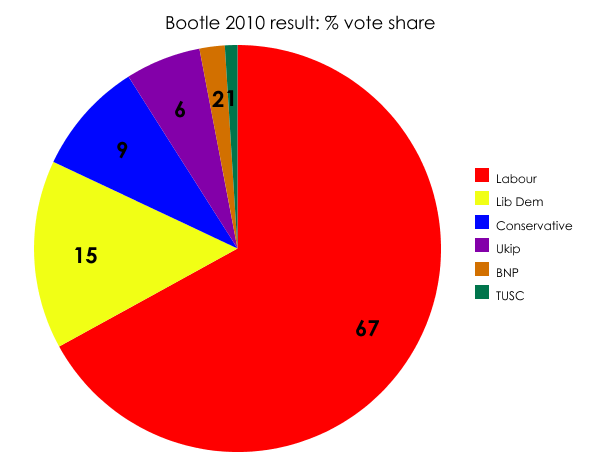 Quite a few Labour hopefuls, both locally and nationally, will be eyeing that whopping 67% share with relish.

Even during the Thatcher years Bootle stood by its Labour MP, Allan Roberts winning 67% in 1987.

It’s been a Labour seat since 1945, before which it was mostly Conservative with the occasional Liberal interruption. The Tory MP from 1931-35 was the spectacularly named Lieutenant Colonel Chichester de Windt Crookshank.

Among the somewhat less flamboyant names already being linked with the seat are Sefton council leader Peter Dowd, who has made no secret of his desire to be the candidate, and one Euan Blair. Yes, that Euan Blair. Both could be ruled out if Labour decides to use an all-woman shortlist, which is often the case for these kind of ultra-safe seats.

According to the Liverpool Echo, the tip of Joe Benton’s index finger was bitten off by a dog during the 2010 campaign. Benton had to spend the day of the election in hospital and was unable to vote.

I somehow doubt his successor will be in quite such an envious position of not having to worry too much about one less Labour vote at the polls. Any one of a number of factors – Ukip; turnout; a divisive selection process; an inexperienced candidate – could mean the days of 67% shares in Bottle (never mind 83%) are over.