Halfway through May, here’s how the parties’ poll averages are looking: 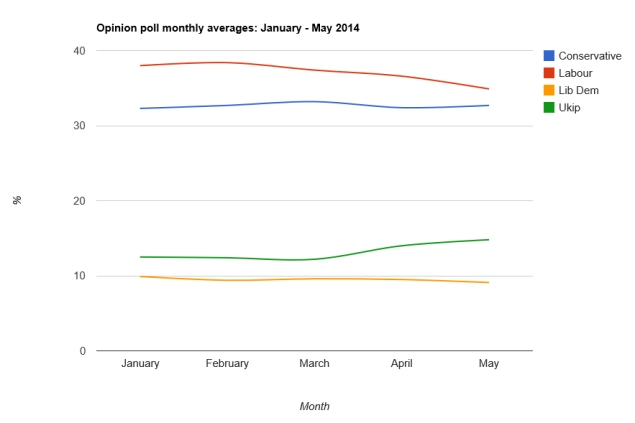 Labour’s average has fallen by three percentage points in as many months. Ukip’s score has gone up by almost the same amount over the same period. But the Tories’ average of 32.7% is identical to its rating for February – and, before that, for both September and October 2013: 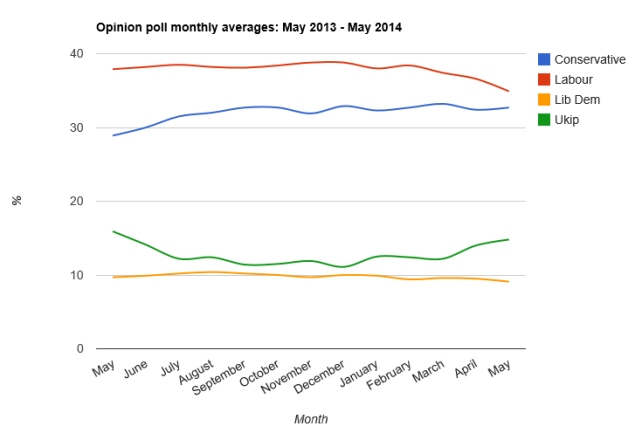 A potentially worrying trend for both Labour and the Tories, perhaps. Cameron and co don’t seem to be benefiting whatsoever from Labour’s drop in support. This is partly why I describe Labour’s apparent decline as not so incredible. The other reason is that it’s not a surprise. The party’s average rating has been sinking slowly since the start of 2014. Furthermore, Ukip enjoyed a bounce in the polls at precisely this point last year. The same thing seems to be happening again now, only this time it looks like it’s more at Labour’s expense than that of the Conservatives.

Ukip fell back in the polls by a monthly average of four and a half percentage points in the six months after the local elections of May 2013. Will history repeat itself this year? Both Labour and Tory camps will be hoping (and, you’d imagine, working to make sure) it does.

The final scores for May could unsettle the Lib Dems as well. The way things are going, there’s a chance the party’s monthly average could end up below 9% for the first time this parliament.